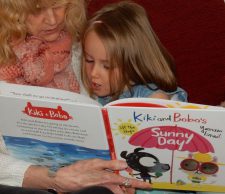 Kiki and Bobo’s Sunny Day
Yasmeen Ismail
Walker Books
Meet Kiki and Bobo. They’re super excited on account of a trip to the seaside; the perfect place to spend a sunny day they think. Off they go in the bus where Kiki eagerly anticipates a swim in the sea: Bobo, in contrast does not.
He doesn’t want the ice-cream Kiki buys either, despite his friend’s best efforts.
Undaunted, she suggests that dip in the sea. This is greeted by a series of stalling activities: rubbing on sun cream, 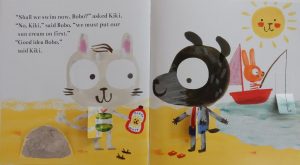 collecting seashells and sandcastle constructing, until finally the indulgent Kiki is rewarded, not by an enthusiastic change of heart on Bobo’s part: rather he tearfully admits that he’s scared of sea swimming.
Three cheers for Kiki: she has just the thing for reluctant swimmers and she’s ready to let Bobo have that, and equally important, to take hold of his hand as they enter the water.

So, overcoming the fear of water – tick; being a super-duper friend and helping a pal in his hour of need – tick. Those are the important outcomes of a seaside sortie so delightfully orchestrated through Yasmeen Ishmail’s characteristically adorable illustrations – littered in this instance with flaps to open – and a straightforward text that in the main, comprises the dialogue between Bobo and Kiki.
Another winner for Yasmeen Ismail.

Papasaurus
Stephan Lomp
Chronicle Books
Using a similar question and answer style employed in Mamasaurus, Lomp has Babysaurus participating in a game of hide-and-seek with his Papasaurus. When it’s Babysaurus’s turn to be the seeker, he can’t find his Papa. His “Have you seen my papa?” is directed to first Stego, and subsequently Anky, Mosa, Velo and Edmont,

all of whom respond by referring to attributes of their own papas. None though can match up to Papasaurus in the eyes of his little one and eventually he pauses his search on top of a large hump in the landscape to consider where his father might be; 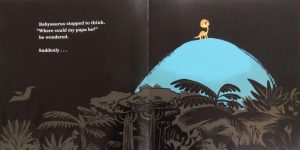 and lo and behold …
The dinosaur characters are rendered in bright colours making them stand out starkly against the sombre shades of the prehistoric landscapes they inhabit and it’s thus that Lomp creates the possibility of hidden danger as the infant dinosaur forays into the unknown perhaps for the first time.
Lots of fun to share with young dino. fans, in particular those youngsters who with a parent fairly near at hand are beginning to make those first forays into the wider world.