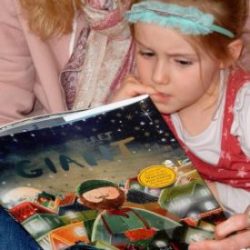 Grandad’s Secret Giant
David Litchfield
Frances Lincoln Children’s Books
Imagine having a giant in your town, one with “hands the size of tables, legs as long as drainpipes, and feet as big as rowing boats.” There is such a one residing where young Billy lives, or so his Grandad tells him: Billy however doesn’t believe it. Especially when Grandad claims he can fix anything such as mend the broken town clock; push the boat stranded in a storm to safety on the shore; and even help cars cross a bridge that’s partly fallen down.

Moreover, the reason Billy can’t see this wonderful being is, so Grandad says, that the giant keeps himself secret “because people are scared of things that are different”.
The trouble is that if nobody can reach to the top of the wall upon which the townsfolk are painting a mural, it will remain unfinished. So, Billy has a dilemma: should he get up at dawn, go to the mural, hope to see the giant and enlist his help, or continue in his disbelief and leave the wall as it is? The former wins out but only so the lad can prove Grandad wrong about the whole giant business. Off Billy goes accompanied by his dog, Murphy.
Who should be waiting right beside the mural but the … 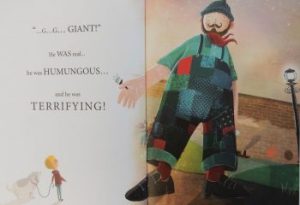 ‘real … HUMUNGOUS and … TERRIFYING!‘
Billy beats a hasty retreat but then, having put a considerable distance between himself and the giant, pauses for thought. Could Grandpa be right about people being scared of difference? Back he goes to tell Grandad about his experience. Was it a mistake to run away, he wonders?
Perhaps; but perhaps too, there is a way for Billy, with Grandad’s help, to show the giant he’s sorry. A plan is conceived and executed; then comes the waiting …

Will the giant accept the apologetic offering? Will he rescue Murphy for a second time, and … ?
I got home from a few days in London to find this book waiting for me. After the tragedy that had just happened there, its messages concerning reaching out, embracing difference and friendship resonated all the more.
Heart-wrenchingly beautiful and ultimately, uplifting, this stunning book for me, out- plays even The Bear and the Piano.

One thought on “Grandad’s Secret Giant”