Very Little Sleeping Beauty
Teresa Heapy and Sue Heap,
Picture Corgi
Sleeping Beauty – albeit of the Very Little kind – she may be, but our diminutive heroine certainly knows all the delaying tactics where bedtime is concerned. On this particular bedtime – the eve of her birthday – she has her Daddy wrapped around her little finger. Even after a proper sing-song, several stories, tickles, dancing and bed bouncing she’s still not ready to settle down. 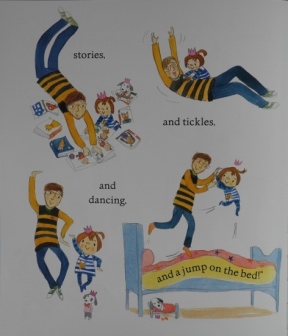 Demands for her Bear, blanket and a drink in her “special-est cup” are issued and fulfilled; well not the cup, which seems to have gone missing. And that’s when the trouble starts. Waiting is not one of Very Little Sleeping Beauty’s strong points and after what seems to her an inordinately long wait, she’s off round the castle in search of her parents and her Aunty Fairy.

It’s her Aunty that she duly discovers behind the door and what’s more, there’s a large and ‘special’ present there too. Needless to say the young miss cannot contain herself and off comes the wrapping paper to reveal …

Despite Aunty’s warnings our almost birthday girl is determined to use it for her own purposes: “I do driving!” she enthuses, “BRRMM BRRRRMMMMM! Beep beeeep!”. But, guess what – she drives it to destruction and Aunty Fairy is not impressed at all. Shouting ensues – that’s the Aunty; and tears – that’s Very Little Sleeping Beauty – both loud enough to bring Daddy running in.

Apologies all round come next; and all this weeping and wailing has at last worn out the tiny princess, so much so that she falls fast asleep (it’s now almost sunrise) and the birthday girl’s slumbers last right through until evening time on her special day, whereupon she wakes saying, “I have party!” and, of course, ‘party’ she has … 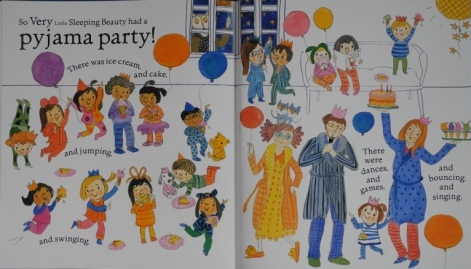 This is another enchanting addition to the Heapy/Heap Very Little series and the maps on the inside front and back covers suggest more to come: I hope so. Reading these books aloud is a delight and I can’t wait for my first opportunity to grab some suitably small children and share this one with them. 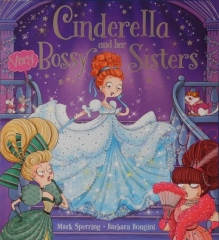 Cinderella and her Very Bossy Sisters
Mark Sperring and Barbara Bongini
Scholastic Children’s Books
In this upbeat, rather chatty style rendering of the traditional story, Cinderella certainly is at the beck and call of her extremely bossy sisters, Greta and Gerta, who like to issue all their orders in rhyme – to Cinders at least. And in addition to all the housework, Cinders can turn her hand to maintenance of another kind too …

When the invitation from the palace arrives inviting them all to the ball, Cinders’ sisters are quick to tell her she can’t go. They start issuing their orders forthwith … “Squeeze the pimples on our chins,/ pluck that hair out from our noses,” (no way hosay) “Drench us both in perfume, /till we smell … SWEET AS ROSES!” (that I’d doubt) but orders are orders.
Duty duly done and sisters departed, who should drop in but a certain Fairy Godmother who soon has Cinders bedecked in finery, glass-slipper shod and with suitable vehicle to convey her to the palace. Having been warned about the midnight undoing of the spell, off she goes, has the time of her life at the ball and does the expected midnight dash leaving a slipper and a distraught prince behind.
Said prince does the rounds of the neighbourhood next day, eventually identifies the slipper’s owner and weds her …

leaving the awful sisters to sulk and serve themselves. Apart from on Sundays that is, when they choose to inflict their company upon the happily married couple, one of whom has a rather rewarding and slightly rude way of dealing with the visitors should their bossiness become unbearable (which it often did).

Barbara Bongini has made the ugly sisters a pair of outlandishly frilly-frocked madams, Cinders’ fairy godmother a diminutive, rather rotund, bespectacled being …

and Cinderella herself a multi-talented, trouser-wearing miss, all of which contributes to making this an amusing take on the original; oh and there’s a ginger and white moggy that seems to find its way into pretty much every scene too.