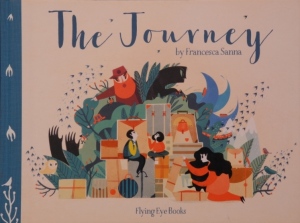 The Journey
Francesca Sanna
Flying Eye Books
Having worked in several London schools where asylum seekers and refugee families are part and parcel of the school community, I was privileged to hear some of their moving stories first hand. The author of this book has also heard and indeed collected such stories from people who have, for one reason or another, been forced to flee their homes and undertake long and dangerous journeys in search of safety. Her book is the result of that collection of personal stories and its author/illustrator has done the tellers proud. It focuses on one particular family of four that very quickly becomes three as the narrator’s father is killed in the war, leaving a frightened mother and her two children. It is their story  we share as they prepare to leave their home and undertake a perilous journey – the mother calls it a ‘great adventure’ – towards a ‘safe place’ where they can live free from fear and from constant danger.
Leaving at night so as not to draw attention to themselves, the family is on the move for days, gradually shedding material things as they go …

and eventually reach the border. Here though, surrounded by forest and blocked by an enormous wall, they are stopped and told they cannot proceed. 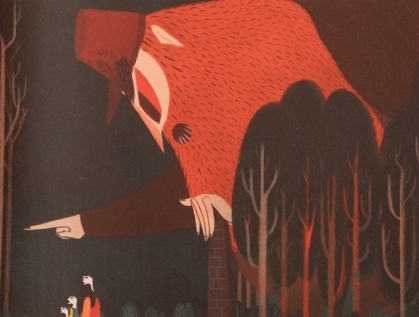 Sleep overtakes them and next morning having eluded the guards, they are approached by a man whom they pay to get them across and on to the next stage of the journey.
After a perilous boat voyage during which stories of monsters give way to stories of magic and kindness …

finally land is reached once more and the three board a train, a train that crosses borders, heading they hope for a new place – a safe haven – where, like the birds that they watch from the train, they can start afresh  where a new story can begin.
It’s impossible to read this without having tears in your eyes, it’s so beautifully told; part of its power being in the simplicity of the telling; but it is the outstanding illustrations that hold such potence. There is that border guard towering menacingly over them and the trafficker shown as only an enormous silhouette …

such eloquence.
This truly is a story of our time and one that deserves a place on the shelves of every family, every educational establishment, every library, every place where people come together to talk and to share stories, Beautifully produced though one has now come to expect that from Flying Eye Books; however this one doesn’t shout quality, it embodies quality.