Terry Perkins and his Upside Down Frown
Felix Massie
Frances Lincoln Children’s Books
No matter how hard he tries, little Terry Perkins just cannot get his words to come out properly, something that greatly saddens the lad and turns his smile into a frown. His concerned mother takes Terry to see the doctor whose solution to this speech difficulty is to turn the boy on his head. He does now seemingly have a smile – of sorts – but the fact is the child is far from happy and he now has a different problem, or more than one if truth be told. Being stuck on one’s head rules out walking and at playschool he becomes a laughing stock. 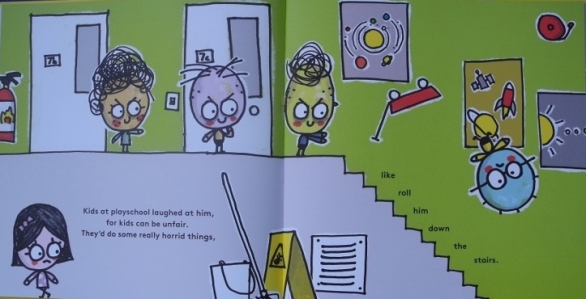 How cruel those bullying children are. It’s a very sad boy who daydreams of living in space, a place where there is ‘no upside down or sideways’.
But then, seeking refuge and solitariness in the park, Terry discovers Jenny (a playschool classmate) who is happy with Terry just as he is; indeed she thinks he’s pretty cool. Good for her, say I.
As the friendship develops both children come to understand just how much more life has to offer when it can be viewed from more than one perspective …

and then at last, Terry really does have cause to smile.
The final lines of this quirky story that celebrates uniqueness, strength of character and the power of friendship really say it all:
‘You never need a reason
to stand up proud and tall:
being upside down or different
doesn’t matter … at all!’

It certainly shouldn’t, but it’s a message that still needs repeating over and over; and this thought-provoking story is one that should be shared with, and discussed by, children in early years settings everywhere. The rhyming text reads aloud beautifully and the bold, off-beat art work by an established animator has enormous appeal.
Long live Jenny’s understanding, Terry’s resolve and resilience, and their individuality.

One thought on “Terry Perkins and His Upside Down Frown”