A is Amazing
ed. Wendy Cooling, illustrated by Piet Grobler
Frances Lincoln Children’s Books pbk
There is so much variety in this collection of poems loosely about feelings and moods arranged alphabetically. The good thing – or one of them -about this lovely book is that the arrangement does not serve as it straightjacket, rather it is an imaginative way of presenting and organizing an exciting compilation. Thus we have a traditional Polish rhyme FiZzy to represent Z, Lemn Sissay’s rap-style, The Emperor’s Cat is eXtraordinary for X and Puddle-Wonderful for P. (Oops! Why have they used capitals for its author, e e cummings?) There are poems from all over the world and from a wide range of poets (almost another A to Z – anon to Zephaniah) in a range of styles and voices, mostly contemporary –among them Carol Ann Duffy, Roger McGough, and Wendy Cope, but also Keats and Robert Louis Stevenson. I particularly love the opening poem ‘Unfolding Bud’ showing how a poem gradually unfolds the richness at its heart. And richness there is a-plenty between the covers of this book. Assuredly it’s one to return to over and over, to ponder, to laugh (try Michael Rosen’s GHEAUGHTEIGHPTOUGH Spells Potato), to wonder over and to thrill. There’s something for everyone here and for all times. I can see it being oft used in schools but I hope it’s riches are not confined to PSHE sessions; this small treasure trove deserves much wider celebration than that.
The mainly watercolour illustrations complement but never overwhelm the poetry allowing the words to speak for themselves.
Buy from Amazon

Interestingly one of the contributors to the above has a brand new collection of his own:
I’m a Little Alien
James Carter
Frances Lincoln Children’s Books pbk
Cleverly arranged, the almost fifty poems herein take readers out into space for encounters with robots, aliens, rockets, the moon, stars and planets and back to earth to meet all manner of creatures large and small as well as other representatives of the natural world and much more, from hats and shoes to mums and friends.
A fun-filled little book to have on hand in infant classrooms and at home, for those odd moments when only a poem will do and it’s a great opportunity to begin to listen to the voice of an individual poet.
Buy from Amazon 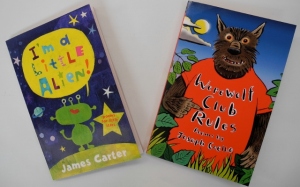 So too, though for a slightly older audience, is the first solo collection from performance poet James Coelho
Werewolf Club Rules
Frances Lincoln Children’s Books pbk
Coelho takes the familiar primary school world and turns it into a place to generate a love of language and a delight in words for their own sake as he presents poems centering on teachers and lessons, pupils, parents and the numerous other items and small events that comprise the school day from getting there to going home. A few are very short – just three or four lines, others such as If all the world were paper, considerably longer and one or two such as Weights on a pole need to be seen on the page but I think it fair to say that all are best served by reading them aloud and there’s not a single dud among them.
The sensations brought out by Halloween’s crumble, the stifling of a child’s creativity in An A* from Miss Coo, the sights, sounds and speed of Skateboarding
are just some of the delights to savour in this exciting debut collection. If the poet continues thus, I can envisage his books becoming firm favourites alongside those of Michael Rosen, Kit Wright, Roger McGough, John Agard and Allan Ahlberg.
Buy from Amazon

Another book that will foster a love of words and language is:

A is for Awesome
Dallas Clayton
Walker Books
Though not strictly a poetry book this is a rhyming alphabet packed with alliteration and, as the author/artist says, ‘a book about possibilties’. Thus we have for instance:
C is for CONFIDENT, COOL and COLLECTED
D is for DREAMING things never EXPECTED
It’s also about positiveness
G is For GREATNESS You’re Well on Your Way, L is for Living Life up to its fullest,
P is For PASSION PURSUING what’s Right
Others I really like are:
I is IMAGINE IDEAS all your own
K is for KIDS being Kids (that’s the coolest)
Q is For QUIET to Escape From the Madness
R is For READING But Also For Radness
V is For VALUES And Keeping Them True
W is For WISDOM Both Spoken and Written
Many of the items representing each letter not the ordinary, run-of-the-mill objects found in alphabet books, indeed some had me puzzling over them; and there are lots for every letter each depicted in Clayton’s quirky style. This is definitely not a first ABC but one full of talk potential in school or at home.
Buy from Amazon

Find and buy from you local bookshop: