The New Kid
Marie-Louise Fitzpatrick
Hodder Children’s Books
Ellie is a girl with inner strength, most definitely. So, when she moves into the purple house in a new neighbourhood she resolutely wears her grey coat (at her mum’s behest), despite the fact that the other children on her street aren’t wearing theirs when they knock asking her to play (at their mums’ behest). As a result she comes in for some unkind taunting from the others, “Ellie-in-the-grey-coat,” they all chant.
“ELLIE-ELEPHANT!” No reply from Ellie. But then she begins, courtesy of that grey coat, to transform herself into an elephant and CHARGE … 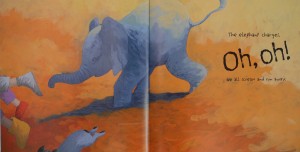 right at the bullies.
Next Ellie, morphs into a seal. The gang members applaud, all except their leader who is the book’s narrator. He feels his position as games-maker-upper is threatened by this newcomer, whose next transformation is into superhero. Time for some quick thinking and action now, boy narrator … there go two superheroes, coats a flying; but then …

A new friendship is born.
Vibrant, sensitively rendered paintings cover every centimetre of this thought-provoking book that demonstrates the power of the imagination in adversity.
Great endpapers too; I particularly like that there’s a bookshop on what appears to be the main street and the hair of every one of those children is just so tactile in appearance. 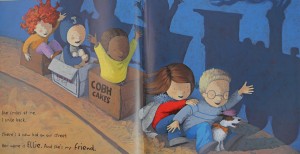 The boy narrator’s voice sounds somewhat detached; for much of the time he appears as an almost passive observer, perhaps reluctantly joining in with the bullying chants. This is an effective vehicle through which to present the way children can at times, all too easily, be cruel to one another, especially to those they view as outsiders. At the same time that same voice talks about positions of power and roles among peers.
Buy from Amazon
Find and buy from your local bookshop: http://www.booksellers.org.uk/bookshopsearch