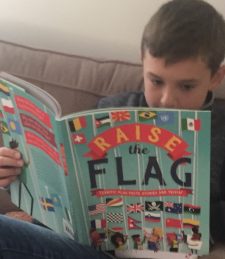 Herein you can find out about the history of flags including their use in heraldry.

Then comes a look at the national flag of every country in the world.
These are grouped under regions, first the Americas and Canada, then a glance at local and regional ones. Thereafter it’s on to Asia, the continent with the largest human population, where we find out about frags from Afghanistan, Bangladesh and Bhutan to Uzbekistan, Vietnam and Yemen. Some countries such as India, have a whole spread devoted to its flag. 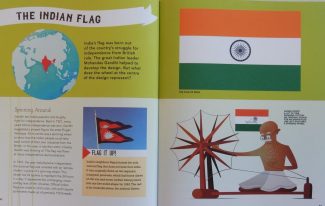 There’s a look at flag usage – in sport, 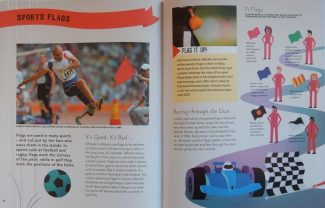 to commemorate amazing feats such as the conquest of Everest, 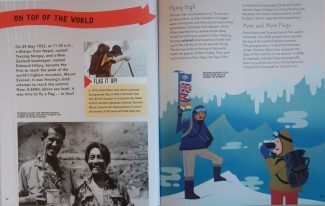 the Apollo moon landing, pirate flags, flags in semaphore and much more.

In total 268 flags are explored including that of New Guinea, designed by a 15 year old schoolgirl; at one time, and until it was discovered at the Olympic Games of 1936, two countries Liechtenstein and Haiti, had exactly the same flag design. Now Monaco and Indonesia share a design; these fascinating facts I learned from the book.

Comprehensive and totally absorbing; I certainly never imagined that vexillology could be so interesting. My only issue is that I’d have liked to see the ‘Union Jack’ called the Union Flag.

This book is very well written and the visual presentation excellent; no spread looks like another and none will overwhelm primary age readers. There’s even a quiz and a final glossary and index.

Well worth adding to a school or family bookshelves.