A little bear wakes after a long sleep and spies something floating in the sky. At first it’s just a red dot, but as it comes closer he notices more; ‘red as a berry / and round like the moon / with a silver string drifting brightly in the breeze.’ Being of an investigative nature the bear goes to discover what he can. The two are soon engaged in a pas de deux

lasting till evening when the bear stops to eat and then settles down with his companion in the glowing moonlight.

Next morning though the two are soon up and about once more with bear rolling, sitting and cavorting with his new friend until … disaster. An over-enthusiastic bear hug ends the balloon’s life rendering it a scattering of red pieces, one attached to the silver string.

As evening comes Bear is left devastated. And full of guilt: ‘Bad bear, / he thought. / Bad, bad bear.’ With the night though as he swims miserably across the creek,

comes another gift from the sky to bring comfort and cheer as it ‘reached down to him and gently stroked his fur.’ And all is well once more: loving memories endure …

Written in spare, gentle words, Matthew Burgess’ poetic allegorical text is both potent and poignant, highlighting the power of friendship, and of loss. In artist Cátia Chien he has the perfect collaborator. Her mixed media illustrations with those changing viewpoints and colours, are sublime, and finely tuned to the changing moods of bear, from the delight of discovery right through to mourning and finally, acceptance (of self and of loss), and healing. Simply, beautiful.

Grandpa and the boy narrator of the story share a special relationship: sometimes they just sit in silence and on other days Grandpa wants to talk.

On one such day he starts the conversation thus: “Every line on my skin tells the story of my life.”

He then begins to recount his life story to the lad beginning each tale with “All aboard!”

Driven by Elia’s wondrous telling, Santiago’s impressive illustrations executed in a vibrant palette, show Grandpa’s travels from his days as a young sailor when he visited first Europe where he ‘wandered through fairy tale castles and ate picnics in groves of olives’, and then to Africa where he ‘danced to the rhythm of drums’. 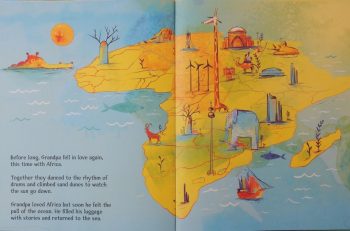 and finally, after a stormy voyage, to America.

It was there that he fell in love, married, settled and raised a family. No longer was the call of the sea pulling him to the oceans where earlier it was the only place he felt truly happy and at peace, at one with the world, able to watch the stars as he slept under a moonlit sky. 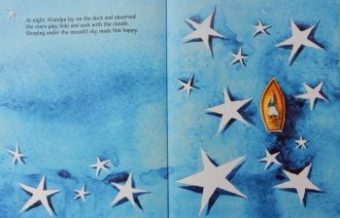 Grandpa’s love for the places he visited is palpable, radiating from the spreads of the continents mentioned in the narrative.

Are all the stories true, wonders his grandson at the end; so too probably, will readers; but no matter what, they’ll be absorbed in the telling and that’s what really counts in this beautiful book.