This is a hugely entertaining story of what happens when the small child protagonist gets hold of one of Mum’s lipsticks.

Having used it for its intended purpose, our young narrator gets his creative juices flowing as he ‘takes the lipstick for a little walk.’ Actually not such a little one as his enthusiastic doodles and oodles are soon adorning various walls,

playthings, the floor and more. And that’s only upstairs. Down he goes guided by the mark making stick, jazzing up the bathroom,

things in the kitchen, big sister’s bedroom and more until …
DETECTION!

Apologies attempted (not by the smug lipstick needless to say) and then it’s time to let operation clean up commence. Were any parts left unscrubbed? What do you think?

I absolutely love the mischievous spirit of this infant who reminds me very much of an even younger relation of mine whose cheeky doings are equally let’s say, experimental. I must make sure I keep this book well away from her or I’m sure it will give her ideas …

The combination of Laura Dockrill’s text and Maria Karipidou’s rib-tickling storytelling pictures with that all-seeing moggy, make for a smashing story to share with an early years class or group just past the stage of the little boy narrator. 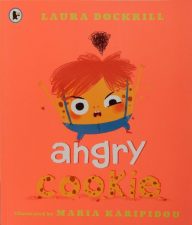 Who can resist the words of the chief protagonist on the back cover: “Don’t even think about opening this book, you nosy noodle. I’m warning you. I am very angry.”
Of course, like me you will immediately open the book and discover that Cookie IS angry, very angry and causing him to have daylight flooding into the book and thus his bedroom, is quite simply, intolerable.

However since we’ve already committed that outrageous act and are apparently not going anywhere, the biccy feels bound to share the reasons why he’s so aggrieved.

It’s on account of the previous day – a terrible one by all accounts – that began when flat mate Barbra insisted on playing the same tune on her new recorder over and over. (Cookie has my sympathies there.) 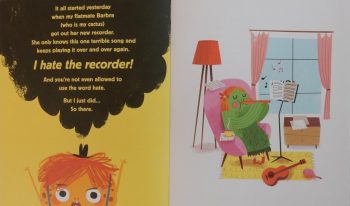 Next came running out of his favourite sweet toothpaste and having to use an unpleasant spicy one instead.

Even worse though was the bad haircut that forced our cookie narrator to wear an ill-fitting hat; unsurprisingly nobody makes hats for cookies, hence the bad fit that makes him a source of amusement to others. 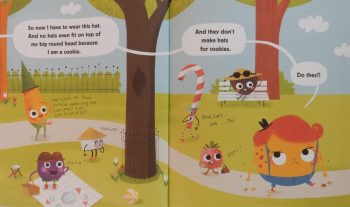 If you can believe it though, the day has to throw in an even bigger disaster. Angry Cookie heads to the ice cream parlour, his heart set on his favourite vanilla sundae topped with all manner of yummy sprinkles and served in a tall glass. But – I’m sure you’ve already guessed – they’ve run out. Can you blame the poor thing for his anger?

Then on the way home along comes a bird that almost makes a meal of Angry Cookie himself; 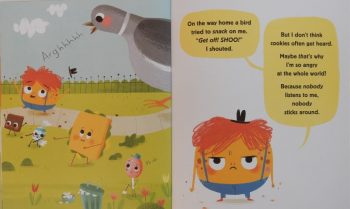 but perhaps there is one consolation. Could our devotion and friendship be the key to a happier Cookie? After all we have stuck around despite all that the self-confessed ‘grumpy lump, horrid humph’ has said and done, so it’s worth waiting around a little longer to see if happiness is lurking somewhere under that tiny titfer.

What a deliciously quirky, witty tale Laura Dockrill has cooked up. Young children will adore this grump of a character and likely identify with his moody moaning.

Maria Karipidou has done a terrific job portraying Angry Cookie, making him, despite all that ranting, a character one cannot help but love right from the start.

Destined to become an early years storytime favourite methinks, and a great starting point for talking about emotions.