At the annual lantern festival young Kitty, superhero in training, returns in a fifth adventure, ready to enchant young solo readers with her nocturnal catlike superpower.

Kitty is pleased with the lantern she’s created for Hallam City’s Festival of Light but as the parade is just beginning, a mysterious burglar is at work among the crowds. Having spied a shadowy figure, Kitty knows that she’s going to have to call on her feline superpower as she turns investigator.

Now her mission is to prevent the festival being spoiled and without the assistance of her firework fearing cat crew, she must summon all her superhero skills and bravery to chase the fast-moving thief.

As always Paula’s words and cast of cracking characters, combined with the plethora of Jenny’s arresting two-coloured illustrations are a delight. This tale of friendship, family, building self-confidence and being brave is an ideal read for Kitty’s countless established followers, as well as others just starting out on chapter books.

There’s a crisis in Bumbleford. For a whole week, somebody has been slowly but surely stealing the town’s entire stock of biscuits. Make that two crises for now Roly-Poly Flying pony Kevin, stands accused of the crime of stealing said biscuits – all the evidence seems to point in his direction – despite his not remembering eating the biscuits, which he surely would have, fig rolls and all. 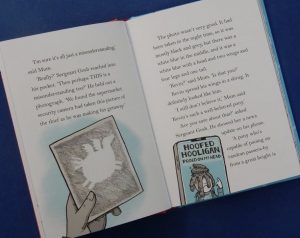 The only ones left anywhere (and that’s in the next town), are some speciality Sprout Squashies, good for you but tasting disgusting and fart-inducing, especially when sampled by a certain RPF pony.

To avoid arrest, and hence removal from Max and family, poor Kevin is forced to go on the run – or rather the wing – from the local police constabulary. With Kevin already being dubbed as the Biscuit Bandit, it’s the Horse Prison for him unless Max and Kevin’s friends can help find clues to clear his name.

The search is on: can they unearth the real culprit (not forgetting the biscuit stash) before the police track them down?

Once again team Philip and Sarah have created a hilarious and enthralling adventure – a whodunnit – with its wealth of wordplays and asides, ensuring that readers giggle their way right through to the final reveal.

Never let it be said that Sprout Squashies don’t have their uses.