New sibling unsettlement quickly arises when Fergal’s Mum and Dad bring home ‘the egg’. From this emerges a new baby sister for the little dragon and with its arrival, funny feelings start within Fergal. Even nan’s gift of flying show tickets lift his mood only briefly because Fern’s actions really stoke up Fergal’s inner fire.
Then to make matters worse, comes the news that the flying show excursion is off: Dad has to get medicine for Fern who’s become sick. 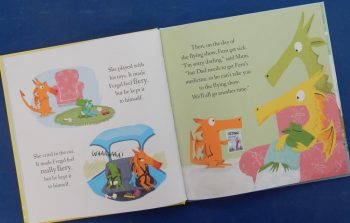 Inevitably Fergal’s fiery feeling grows even stronger, so much so that he does something to make him the centre of attention, which it does, once Dad discovers his whereabouts.

After a frank Father and Fergal discussion on feelings, Dad shows his son something by way of explanation.

Later on as the two do some yoga side by side, the feelings discussion continues 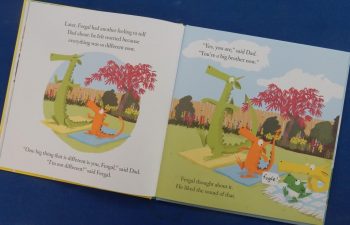 and eventually Fergal understands that something in him needs to change. Being a big brother is an important role and perhaps it’s one he can undertake successfully and lovingly. 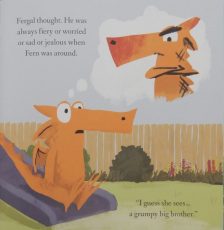 As with previous Fergal stories, Robert Starling conveys this one with sensitivity, humour and considerable charm.

Share with little ones at any time but it’s especially apt if you’re a family with young child and a new arrival. 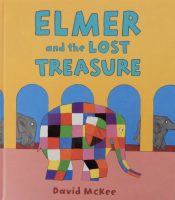 The adorable elephant, Elmer stars in what is almost unbelievably, his twenty eighth picture book adventure.

He, along with cousin Wilbur and three other elephants set out on ‘a long, exploring walk’ through the jungle and after a while find themselves in unfamiliar territory.

After a roll down a steep slope with Elmer in the lead – naturally – they discover an entrance to an old forgotten palace and start exploring within, or rather Elmer and Wilbur do. The others meanwhile have their own agenda. What can they be doing?

The palace is incredible with huge domed halls in shades of blue, amazing mosaics, tiles and carvings. But who will find that Lost Treasure? And what is it? 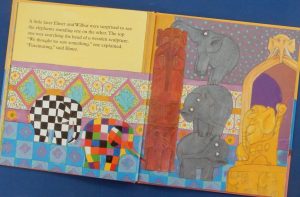 Another absolutely smashing story of everyone’s favourite patchwork pachyderm and his pals, told and illustrated with David McKee’s usual sense of humour and fun, warmth and heart, that is also reflected in his main character.