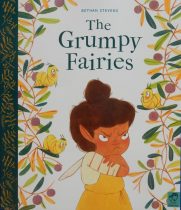 I suspect that most people, youngsters especially, are of the opinion that fairies are cute, kind little things, but that isn’t true of the entire fairy race. The smallest ones especially are grumpy, not just a little bit but grumpy in the extreme. They flatly refuse to do those helpful jobs expected of them by the adults of their kind 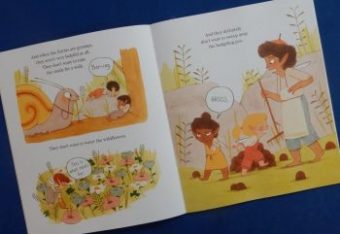 as well as being downright rude to the birds that request their assistance. And as for the goblin warning those same birds give them, they don’t even bother listening to it.

The grumpy fairies treat the bees and Mouse in similar fashion, ignoring their words about there being a hungry goblin on the wander looking for lunch; and they’re so busy with their grumps, that they fail to notice … 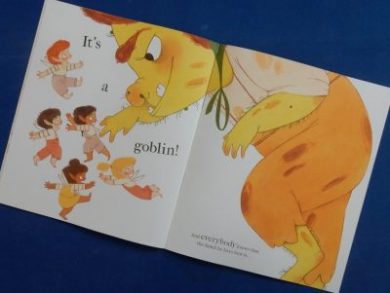 It’s fortunate that in addition to grumpiness, these particular fairies have cleverness as part of their constitution. Can they succeed in extricating themselves from a very tricky situation, or will they become a ‘sweet and sour’ midday repast for a certain goblin?

This is Bethan Stevens’ debut picture book. It’s full of visual humour; I love her portrayal of those Grumpy Fairies that are similar to grumpy little humans in so many ways, and her hirsute-limbed goblin is terrific fun.