Grandad and Boy are doing some cat minding for a friend. Boy (the narrator) has done his research and announces that it’s a simple task: they need to feed, cuddle and play with the moggy.

However, cats, like humans, don’t always conform to the norm and this visitor is one of those.

She definitely doesn’t want to play; she turns her back on the food they offer,

and neither a nap nor a cuddle proves any more agreeable.

Boy is convinced the creature doesn’t like him. Grandad is slightly more sanguine until, the cat makes a dash for it.

Through the window she goes with Boy and Grandad following the escapee as best they can,

out into the wilds, where the real and the imagined merge. 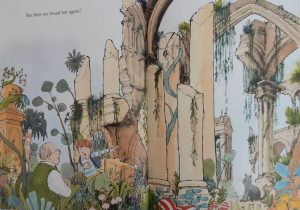 Eventually the chase leads them to a fabulously diverse feline gathering where Boy and Grandad join in with the frolics.

Then safely back home once more, Boy decides that perhaps Cat is now more favourably disposed towards him.

Using a repeat refrain as part of Boy’s simple narrative, Sam Usher lets his expressive, superbly detailed, scratchy pen-and-ink images do much of the talking in this splendid celebration of the power of the imagination, and the on-going loving intergenerational relationship.