I Can Catch a Monster
Bethan Woollvin
Two Hoots

In a castle in a mountainous region in days of yore live Erik, Ivar and their little sister, Bo.

When her brothers announce that they’re off on a monster hunt Bo wants to accompany them. “You’re far too little,” comes the reply but what Bo lacks in stature she makes up for in determination. “I’m smart and brave and strong!” she thinks before sallying forth on a monster quest of her own.

Very soon she has her first ‘monster’ encounter: “… get ready to be got!” she warns the creature, only to learn it’s a griffin and far too polite to be a monster. 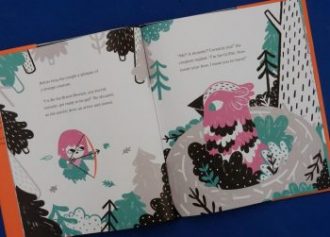 Indeed he offers to assist Bo in her quest.

Her next encounter takes her (inadvertently) plunging beneath the ocean waves to face a kraken. She too seems at first, monstrous 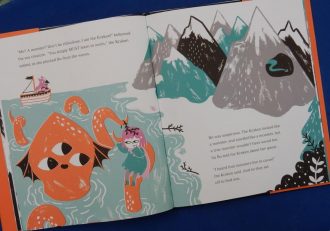 but again Bo’s assumption is wrong, for the kraken also assists her.

Next destination is a cave from which issues an enormous roar.

Surely deep within must be the scary monster Bo has been seeking all along. However the roar turns out to be a dragon venting its parental anguish over missing baby, Smoky.

From then on the quest becomes not a monster hunt but a Smoky search, which eventually brings the story full circle, with Bo face to face with two human monsters.

Now she can prove well and truly, who really is in charge.

I love Bo’s rebellious attitude and applaud her open-mindedness and willingness to learn from her mistakes. There’s plenty of potential discussion sparkers in Bethan’s tale but it’s her wonderful illustrations that are the book’s real strength.

Executed in gouache with a more varied colour palette than in her fairy tale reworkings. Bethan’s idiosyncratic art uses teal, duck-egg, orange and pinks to create the mock-medieval scenes for this story. Love those end papers too.