Here’s an interesting book that was probably intended to act as a prelude to the Tokyo Olympics due to open in July.

Most of us were eagerly anticipating this summer’s Olympic Games but I doubt if so many are aware that competitive sport goes way back as far as 3000 BCE or even earlier in Sumer (now Southern Iraq) when towns held boxing and wrestling competitions. The evidence for this is found on ancient Sumerian clay vases and tablets …

Ancient sports in other parts of the world too were largely linked to warrior skills for instance moving to Ancient Egypt (3100 – 30 BCE) boxing and wrestling, along with archery and spear throwing and weightlifting, were practised; so too were swimming races and rowing contests.

Special places for spectator sports go back more than 3500 years. Aztecs played a ball game in stone courtyards specially built for the purpose; it was a deadly serious game as the losing side may have been beheaded. Horrendous thought!

Moving forward in time to Ancient Greece 776BCE. This was the year in which the first known Olympic Games took place at Olympia. Interestingly the very first Olympic winner on record was Koroibos, a cook who won a running race called the ‘stadion’ and from that comes the word ‘stadium’. A spread devoted to these Olympics includes information on the duration, events, the consequences of cheating, if discovered and the rewards for winning an event. 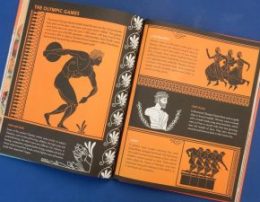 Another spread features the legendary Milo of Croton a young wrestling super star.

This is just a taste of what’s in this fascinating book that also includes information on the Ancient Roman Games, the Asian Games, the European Games from Medieval times on, Viking Games and how the Modern Olympics evolved from 1896 to now. 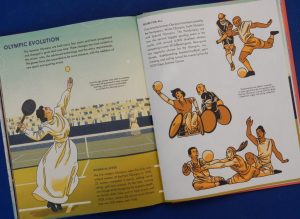 The book concludes with a timeline showing significant dates.

Avalon Nuovo’s powerful images of the athletes, warriors and participants rendered in a colour palette predominated by shades of ochre, and from a variety of perspectives, serve to take us as spectators into the ancient world of games and follow its unfolding history as described in Iris Volant’s narrative.