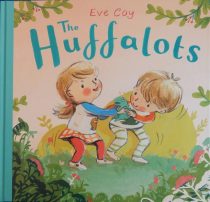 Eve Coy’s picture book slices of family life are wonderful. First we had Looking After William and now this new one portrays two small siblings and their mother with the focus mainly on the former.

Having been woken from their slumbers by mum, the brother and sister are in a really grumpy mood – totally at odds with the world and one another it seems.

“No!” is probably their most used word until, during breakfast something magical happens and they transform from Huffalots to Huffalittles.

“No” is still said but maybe rather less as they head to the park accompanied in the background by their mother.

It’s there that magical transformation number two happens: the Huffalittles morph into Lovealittles and later comes the third transformation.

Back home again the Lovealots truly enjoy being together, so much so that they get rather carried away making lots of noise and mess.

Guess who, thanks to sheer exhaustion has now become a rather large Huffalot?

Maybe those two little ones can work their own magical transformation so that Mum becomes Lovealot number three.

This reviewer assuredly is a Lovealot when it comes to this brilliantly observed, superbly illustrated story that will certainly strike a chord with parents and their small offspring.

I can’t imagine a single Mum who wouldn’t relate to Eve’s oh so realistic scenes of the ups and downs of family life with small children.