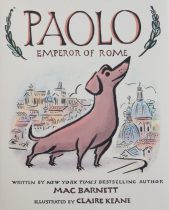 One of the only ways we’re going to be able to visit Rome in the near future is through stories, so it’s particularly welcome to be transported there thanks to Mac Barnett and Claire Keane’s tale of dachshund Paolo, resident of that beautiful city.

Poor Paolo however is forced to spend most of his time stuck inside Signora Pianostrada’s busy hairdressing salon staring out through the shop door with little if anything to enjoy other than the occasional whiff of the great outdoors.

By night and most of the day Paolo would dream of escape.

Then one day an old lady leaves the shop door open and that’s when Paolo seizes his chance to break free.

Once in the wild streets he soon discovers a world of beauty, excitement and yes, danger, first in the form of a hostile feline among the ruins. His attitude to the moggy though is, ’The biggest among you has scratched my cheek, and I did not flinch. Will any other cat challenge me?’

They don’t, but then he encounters a pack of dogs as he searches for food. Antagonistic at first, they soon make him their leader and together they enjoy the city by night.

Next morning Paolo becomes a hero, saving six nuns from the Trevi Fountain. I can’t imagine how they managed to fall in, but the pooch becomes a hero. 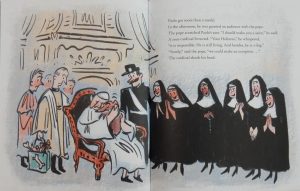 Most important though with his indomitable spirit, he has succeeded in conquering the city.

I’ve not visited Rome for real for many years, but Mac’s narrative, together with Claire’s illustrations truly do evoke the sights, sounds and smells of this ancient city absolutely brilliantly: I love the brio of the telling, the textures of the scenes, and the portrayal of characters both animal and human, is sublime.

Somewhat reminiscent of the likes of Ludwig Bemelmans, this book has all the makings of a classic.