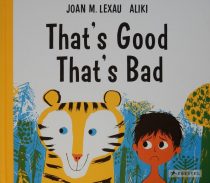 Prestel have brought back a vintage classic published first in 1963 with splendid reproductions of Aliki’s superb illustrations. Here’s what happens:

A boy sitting on a rock in the jungle is confronted by a tiger. The tiger politely tells the lad to run away. “… I will run after you. And I will catch you. And I will eat you, Boy, so run from me” it says.

Boy however is too tired, Tiger asks why and hoping to avoid his fate, the boy begins to tell the tiger his tale.

It’s a thrilling one with frights, falls, fun and a bit of flight that involves encounters with a rhino

that’s sure to enthral youngsters, just as it does the hungry tiger. I know though, that it’s the former who will end up having a jolly good laugh at the satisfying ending.

There’s a lot to like about this book: the way the boy character demonstrates the power of storytelling; Joan Lexau’s own skill at telling what is essentially a tale-within –a-tale – and a real page turner it is too.

Then there’s Aliki’s visual storytelling: I love the way she places the story-telling Boy and Tiger on opposing pages as though viewing the action from the sidelines, with Boy’s own narrative unfolding on the verso and Tiger’s comments “That’s good”,

“That’s bad” or variations of same, being made on the recto each time. The subtle changes to the facial expressions of these characters are wonderful, really bringing to life the double drama.