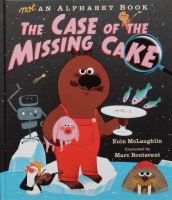 Not an Alphabet Book: The Case of the Missing Cake
Eoin McLaughlin and Marc Boutavant
Walker Books

If ever there was a book that immediately snares the attention it’s this one.

A serious crime has been committed, so the bear narrator of this intended ABC would have us believe on page 1: the enormously tempting creamy, lavishly sprinkled chocolaty cake meant to represent the letter C on page 5 has been stolen. Poor bear is beside himself and entreats readers to assist in tracking down the perpetrator of the act whose hiding place is somewhere between the covers of the book.

Off we go then, to interrogate potential suspects; first stop the letter A where the response is ‘no comment’. 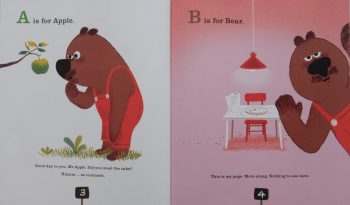 Even at this early stage, if you’re sharing this story with little ones, the clues are evident and they’ll be relishing their inside knowledge.

Okay, on we go again, whizzing past Bear’s B page – uh-huh! – and we know C won’t yield anything helpful so the next stopping point is D where fearful Dog has an alibi, so we see.

We move on and there’s a wonderful cross-questioning of a couple of traditional tale characters to relish on F and G. 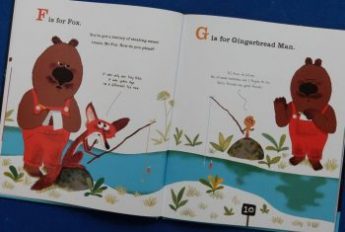 Bear’s narrative is superb, as tongue-in-cheek, he thinks aloud rather than quizzing H, I, and J before receiving a lightning blow on the next page and down he plunges for a spot of restorative TLC from the character representing N. 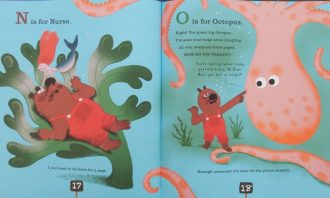 Octopus however is far less tender-hearted, indeed it’s downright suspicious but Bear hastens on to P where there’s a wrongful arrest of an unsuspecting porcine creature … 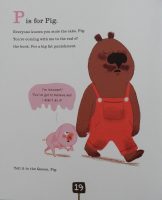 all of which takes us onwards letter by letter to V and W where a certain character is almost, but not quite, rumbled and we might leave him basking in his own glory but that is not quite the end of the story …

What an absolutely tongue-tingling, delightfully delicious book author Eoin McLaughlin and illustrator Marc Boutavant have conjured up between them. Everything about their delectable detective daftness is brilliantly done and I’ll guarantee any audience you share it with will immediately demand second or even third helpings.

One thought on “Not An Alphabet Book: The Case of the Missing Cake”