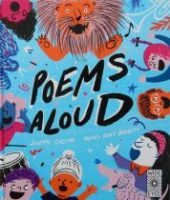 Joseph Coelho is a performance poet so it’s no surprise that the nineteen poems in this book are first and foremost, intended to be read aloud or performed. Through so doing children can have lots of fun and discover the pure pleasure of spoken words.

There are poems for a range of moods and for each one, Joseph provides a helpful introductory line or so about reading it out loud.

There are some short playful alliterative Tongue Twisters to start with, including the sibilant The Slime Takeover that children will definitely delight in:
‘Slipping, shimmering, stinking slime, / sloppy cerise or shades of scarlet sublime. / It sticks and sucks and spits and spools, snaking slime slumping several school walls./ The slime swells and stretches, and starts to sprout, … ‘

They’ll also relish The Chilly Chilli with its homophones. Here’s the second verse telling how it feels since being ‘shipped to store’:
‘A little chilly chilli / feeling cold and in a knot. / Not a happy, chilly chilli. / In fact, this chilli feels quite ill / like it’s caught the flu. / It flew all this way / packed in a plane / to add heat to otherwise plain food.’
It sounds as though the poet had as much fun composing this as youngsters will when they read it, emphasising the bold words as he suggests.

As I write today the following are my favourites  (although they might well be different on another day): This Bear with its figurative language such as is used in the opening verse:
‘This lumbering bear is old / This lumbering bumbling bear / has shuffled over rugged imagined mountains. / Urged his bulk, slow and strong. / Slow as geography. / Strong as tree growth / through the forests of his mind.’
What a wonderful picture that paints in the reader’s mind even without the splendid illustration. 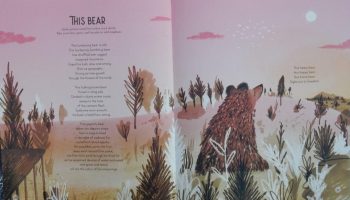 I love too the short Animals offerings that include Lion: ‘I am meat-licker, / bone-cruncher, / big–meower. / I cat walk with pride. / My mane is a hairdo of envy. / My roar is a rumble of mountains. / My claws, a savannah of pain.‘ Superb!

Next is the fantastically fanciful Something Wondrous, the first line of which urges:
‘Peer from your window in the deep of night.’ You might spy these, for its second verse goes thus:
‘A unicorn nibbles the gold leaf tree, / hobgoblins fist-fight in every flower. Mermaids flop from a luminescing sea. / Earth giants show-off their hidden powers.’ Joseph’s  power with poem creating is certainly not hidden and I really like the use of silhouettes in Daniel Grey-Barnett’s illustration. 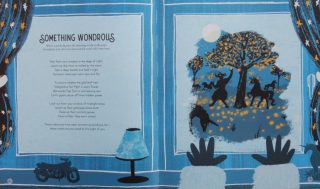 The final one of today’s favourites conjures up a place whose sights, sounds and smells I’m familiar with. Even if you’ve never been On the Streets of New Delhi this poem will make readers feel that they’re experiencing the place. Here’s how it begins:
‘On the streets of New Delhi / a small brown dog yawns. / The morning light is golden / on the new streets of barking New Delhi.’
It concludes, thanks to the cumulative nature of the last line of each verse: ‘on the new streets of barking, selling, thrumming, chuckling New Delhi.’
Get hold of this cracking book to discover what causes the thrumming and chuckling referred to. Or you could cheat and look carefully at the action-capturing illustration  below; 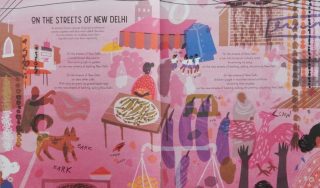 but buy the book anyway – it’s a smasher!