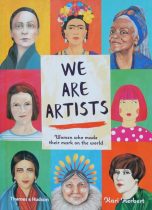 For this splendid celebration of creativity, Kari Herbert has selected fifteen influential women artists from various cultures and different parts of the world who succeeded, often against considerable odds.

Each one is the subject of a chapter that includes a quote, a fantastic portrait (by Herbert), a short biography and one or two reproductions of their work.

I was thrilled to see Tove Jansson, especially her Moomins sketches. Kari Hebert’s ‘Back in 1950s Finland, for a woman to love another woman was illegal. But on the islands… they could live and love as they wanted.’ is an example of the sensitive manner in which this book is written.

As you might expect we meet Georgia O’Keeffe and Frida Kahlo but there are also Corita Kent, Yayoi Kusama and Emily Kame Kngwarreye.

Among the few artists new to me, and despite my being a frequent visitor to India with two close friends who are artists, is Amrita Sher-Gil whose interpretations of the rich colours she saw in the everyday lives of India’s poor are enormously moving.

‘In India the light spoke to her’, we read in contrast to the greyness of Europe where as daughter of a Hungarian opera singer mother and an aristocratic North Indian Sikh father, she spent her early years.

Another new discovery for me is Lyubov Popova, one of several avant-garde women artists in Russia in the early part of the 20th century. I love the quote that introduces her: ‘ Most important of all is the spirit of creative process.’

Engrossing and inspiring, this superb book is for youngsters with an interest in art and those who want to encourage creativity especially in young people.