As we’re shown in Joowon Oh’s expressive watercolour, gouache collaged illustrations, Grandpa has a routine: every day he gets up, drinks tea, tends his plants, does the odd domestic job, dresses and catches the bus into town.

There he takes a walk, window shops, partakes of his favourite dumpling lunch, returns home and on this particular night is in bed early with an idea in his head generated by his walk past the town craft shop. 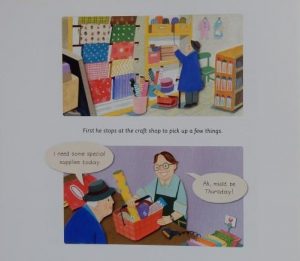 before heading to the usual restaurant. Today however, he doesn’t eat in; instead he orders two take-away portions of dumplings, stops to pick wild flowers on his way home and then waits.

Once all his preparations are set out on the table, a page turn shows the reason for his different actions – his granddaughter appears.

The joy of both on meeting is palpable as she dashes into his open arms; and so it is too in what they then do together.
The remaining narrative takes the form of the dialogue between the two as they spend an uplifting Thursday together. 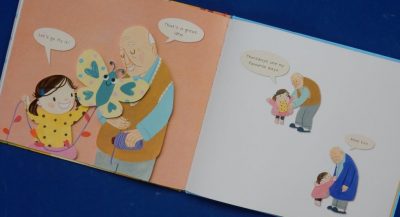 Full of warmth and tenderness, debut author/illustrator Joowon Oh’s portrayal of the special relationship between a child and grandparent is a charmer.

Using the rhythmic structure of ‘The House that Jack Built’ Melanie Hill has created a lovely story as we join in the celebration meal that is being prepared for when family and friends come together ‘Around the table that Grandad built.’

The table isn’t the only item with family associations: there are sunflowers picked by the young narrator’s cousins; napkins sewn by Mum; glasses from Mum and Dad’s wedding are set out; and the cutlery was given long ago by Dad’s grandma.

Then comes a look at the food – squash, roast potatoes and peppers, beans, ‘toasty tamales’, spicy samosas and rice pudding; there’s warm bread, butter made by the children and jam made by Dad; not to mention pies a plenty.

Everyone is thankful for the tasty food and for the bonds they share ‘around this table that Grandad built.’

Feelings of joy radiate from Jaime Kim’s bright mixed media illustrations in this story that celebrates togetherness and sharing the bounties of the season.