Just right for an early years collection are:

One moonlit night down on the farm, with his two sly eyes, one famished fox is on the prowl. Lots of lovely alliteration describes the happenings:

The three plump hens need to keep their ears and beady eyes open.
However that fox is in for a big surprise when he takes six silent steps towards the hencoop and taps seven times upon the outside …

In a dramatic and satisfying climax (although not for the fox), debut author/illustrator Kate Read takes us right up close to the action in her counting story.

With an economy of words she creates a visual comedy that is both exciting and gently educational; but It’s her superb visuals that carry the power – bright, textured art combining paint and collage – that build up expectations of the outcome 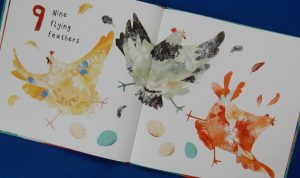 and then turn the tale right over on itself.

Take a group of inquisitive animals and an assortment of ‘pressable’ buttons of different shapes and colours; add several generous spoonfuls of imagination and stir. The result is this playful interactive picture book for little ones.

Squirrel starts the whole thing off by prodding at the red button with his stick and wondering what will happen. It beeps, and that sets off the button investigation.

To discover which is the clapping button, which one sings songs;

which blows a raspberry; 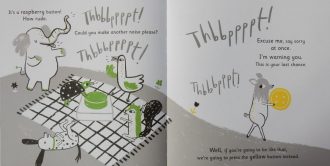 what joys the yellow button delivers, and the pink and purple ones, you need the fingers of a child or so, and the willingness to indulge in some pretend play.

This is children’s / YA author Sally Nicholls debut picture book and it appears she’s had as much fun creating it as will its intended preschool audience. The latter will take great delight in all the noisy, occasional mischievous activities offered at the mere touch of a button. Adult sharers on the other hand might well be relieved to learn what the white button does.

Seemingly too Bethan Woollvin had fun creating the illustrations; she’s certainly done a cracking job showing the seven characters having a thoroughly good time as investigators and participants in their own comedic performance.