Not all wolves are big and bad: meet wolf Wilfred; he’s not at all scary despite being a member of a rather unpleasant pack. Their leader despairs of Wilfred’s un-lupine characteristics taunting the poor creature mercilessly

and ordering him to join in the attack on the sheep the following night to learn proper wolf behaviour.

That night however, Wilfred visits Mildred sheep and together they come up with a plan to help the other sheep.

Will their ruse be successful in foiling the wolves’ attack? 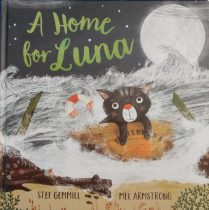 When Luna is washed up on a strange shore far from her home, hearing nothing but the sound of the waves she feels lonely and afraid.
After spending the night sleeping beneath the container she’d arrived in, she smells a smell not unlike home. Following her nose she comes upon some penguins feasting on sardines and one in particular with yellow eyes catches her attention.

Little by little Luna gets closer to Yellow-Eye and it isn’t long before she’s become a part of the huddle.

One night a boat nears the shore; the crew are surprised to see a cat among the penguins and want to take her with them. The reaction of the penguins and Luna convey to the well-intentioned fishermen that this is not going to happen; and as the boat sails into the darkness, it’s clear to Luna that she has a new home with the penguin huddle and that’s where she now belongs.

In this tale of displacement and friendship, a spare telling that is in keeping with the stark setting, combined with debut illustrator, Mel Armstrong’s textured illustrations capturing the bleakness of the penguins’ home against the movement of the ocean, and clearly showing in-comer Luna’s changing relationship with the resident penguins, convey something of the isolation felt by refugees in a strange land.