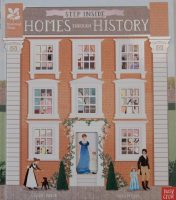 Most readers of this book will recognise many of the features of the contemporary house illustrated herein, and those who are as old as this reviewer will recognise some of the rather garish décor shown in the sixties home. How many though, unless they are members of the National Trust or have a special interest in the topic, will know what living in a Late Middle Ages manor house or a Tudor mansion was like?

Three double spreads each, explore seven periods in time from the mid 13th century through to the present day.
Intricately detailed laser-cut pages show us not only the particular residence outside 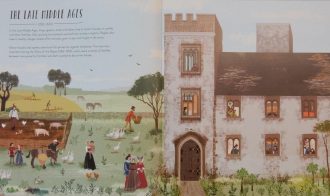 and in, but also the fashions, family life and furniture of the period. 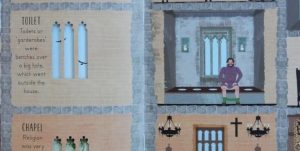 to the Georgian chamber pot beneath the bed, the new Victorian indoor flushing toilet through to the present day en-suite bathrooms that many of us have. Also fun is the ‘spot the artefact’ feature where readers are asked to find a named item of furniture or small object in each house.

Full of interesting snippets of information, this well-illustrated book is worth buying for a classroom collection, or if you intend visiting a stately home or historic house, whether or not it belongs to the National Trust, Nosy Crow’s collaborators for this title. 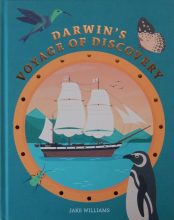 Following his Really Remarkable Reptiles, illustrator/designer Jake Williams has created another fascinating, stylishly illustrated book, this time about the naturalist and geologist Charles Darwin famous for his epic voyages of adventure on HMS Beagle and his theory of evolution ‘On the Origin of Species’.

The amazing creatures both large and small that Darwin saw during his explorations (some of which we see larger than life illustrated herein) furnished a wealth of detailed notes and drawings, observation data and fossil specimens; and readers can follow in the footsteps of the famous biologist as he travels the world for five years as the Beagle ship’s biologist sailing from England to the Cape Verde islands, from Brazil to the Galapagos and from Tahiti to Australia and finally, back home.

There’s a wealth of information about such things as the ‘cracker’ butterflies of Brazil; 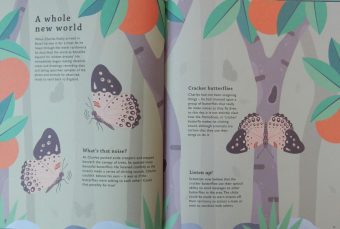 how Darwin unearthed the skull of a giant ground sloth in Argentina and the steamer ducks he observed in the Falklands, 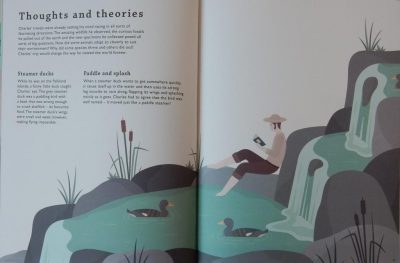 as well as maps showing the Beagle’s progress.

Recommended for all those with enquiring minds, this is a beautifully produced book that highlights the importance that careful observation makes in the furtherance of scientific discovery.