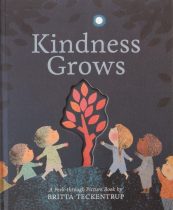 Within her signature style collage scenes, Britta Teckentrup cleverly uses the growing die-cut image to represent on the verso spreads an ever widening crack or rift caused by bad feelings towards others or unkindness of some sort, while on the recto the same shape grows to become something positive – a beautiful tree nurtured by acts of loving kindness towards others be they words spoken or actions such as sharing, forging a new friendship, working or playing together.

Little by little though, as the rhyming narrative says, from a small beginning – a simple seed of kindness like a smile or reaching out … 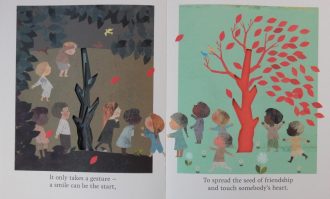 even a seemingly enormous rift can be repaired.
If only … 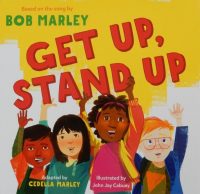 Get Up, Stand Up
Cedella Marley and John Jay Cabuay
Chronicle Books

The daughter of reggae artist and social activist Bob Marley has taken one of her father’s most popular songs and used it to create a powerful picture book message for young readers and listeners.

That message is clear and unequivocal – don’t let anyone bully you or other people – and we’re witness, thanks to Cabuay’s bold, bright scenes rendered in pencil and digitally, to a school day wherein when such bullying happens, the other children don’t just stand by and watch. Instead, they stand up and rally round be it in the playground,

at the bus stop, on the school bus, in the street or the park.

The final spreads show the youngsters hoisting a huge flag depicting Bob Marley and his anthem One Love above the stage whereon they then dance and sing for all they’re worth.

This is a book to have in primary classrooms to open up discussion on themes such as standing up for yourself and others in the face of injustice, no matter what that may be. Certainly in the UK right now, it’s a message that needs saying over and over. Of course it isn’t always easy to do but it’s never too early to start learning the appropriate ways to respond to discrimination, abuse, inequality, prejudice or any kind of wrong doing.