This truly is a book of surprises.
It begins with a call, “Where are you? Hurry up, we have to go!” But Hannah is nowhere to be found and all we see is her bedroom …

We then see Hannah in a park and it seems she’s not leaving any time soon (she’s heard the voice, we learn).

In fact she’s made herself a feather cape, a bed of leaves, a bow and arrow and we see her accompanied by an ‘Odd Furry Creature’ for which she has fashioned another feather cape – a much larger one to accommodate its huge bulk – and a bed of leaves beside her own. Together they forage for food, which they share, but nobody else enters their secret hideout. 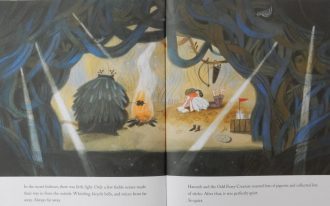 After some while Hannah hears a voice. “Where are you?” it asks and she decides it’s time to venture out and show the Odd Furry Creature things he’s never before seen out in the world beyond.

Pretending to hear an affirmative response, she takes off its cloak, placing it beside her own, extinguishes the fire and the two leave their secret hideaway and paw in hand, walk around the park.

Then a page turn reveals the unexpected: Hannah sitting busy creating a scene: all the while she has been drawing the story …

From the outset (there’s the soft toy in her bedroom basket on the first spread), there have been allusions to Sendak’s Where the Wild Things Are – a visit to a dreamlike wild place, safe yet without parental interference, from which she’s called back from her imaginary journey – the journey that she has all the while been drawing on her paper; even Sala’s colour palette is similar to Sendak’s.

Mattiangeli’s telling is enigmatic and powerful; I love her concluding lines: “From the outside, no-one would have imagined that deep within the drawing, at the end of a long road made of brown and green pencil marks, a little girl had lived for a very long time. “

How perfectly she shows the way in which children’s art can, if they’re left alone, take them completely out of themselves into flow mode where they do indeed become as one with their creations.

Sala’s largely muted illustrations are the perfect complement for the author’s words, richly detailed and having the power to pull the reader right in to every scene, so that they too feel almost a part of the story – a story in which imagination and creation are inseparable.