‘Some years ago a boy named Thomas spent the summer at his grandmother’s island cottage.’ So begins a beautiful story set in Maine some time in the last century.

Early in his stay his grandmother gives the boy a magnifying glass that had belonged to his grandfather and Thomas uses this as he explores the rocky beach one morning.

When he shows Grandmother a piece of glass he’s discovered she tells him that “ … your grandfather used to say that each piece of sea glass has a story all of its own.” 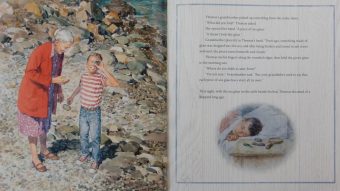 That night Thomas places the sea glass beside his bed and dreams of a shipyard long ago. The routine continues with the boy discovering bits and pieces of glass each morning and dreaming each night. (The dream stories are depicted in greyscale serving both to separate them from the present events and to bring history alive again). 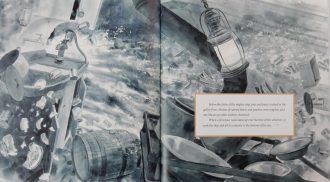 All too soon the holiday ends: Thomas gathers together his treasures and boards a boat back to the mainland. However, a sudden lurch causes him to drop his magnifying glass and some of the pieces fall overboard.

The story then moves to recent times: a girl named Annie walks on the beach collecting treasures and comes upon a piece of sea glass. She shows it to her Papa Tom; you can anticipate what she’s told … The tale concludes having come full circle …

Michelle Houts’ lovely story of journeys, connections, possibilities and the power of the imagination has much to appeal to older picture book readers and is full of possibilities for exploring in a KS2 classroom.

(A final author’s note explains why there is much less sea glass nowadays: a big plus for the environment but children will have to find other treasures on the seashore to fuel their imaginations.)