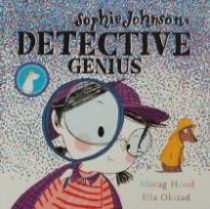 Sophie knows of a ‘terrible crime’ that needs solving and fuelled by the thought of the reward, she’s on the case, determined to discover the perpetrator. 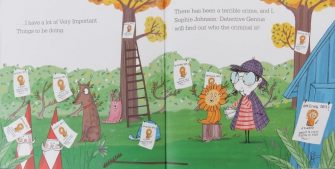 Suspects are arrested and finger-printed while Bella constantly tries in vain to draw something to Sophie’s attention; but so absorbed in her own detecting is Sophie that she’s unable to see what’s right under her nose. 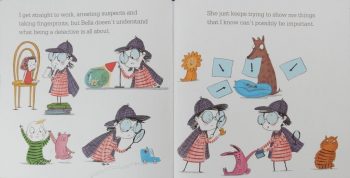 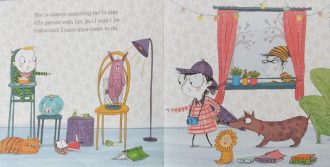 I won’t be a story-spoiler; however observant readers and listeners will likely be making their own predictions well before the final denouement of Morag’s clever, dead pan telling.

Ella’s hilarious scenes of Sophie and her assistant on the case provide the perfect foil for the droll text; and do look carefully at the back cover whereon Sophie’s library is shown.

What will Sophie turn her attention to next? No matter what, bring it on. Meanwhile, for sure, the adorable Sophie will win a lot of new fans with this latest book.