What On Earth? Birds
Mike Unwin and Pau Morgan
QED

Natural history writer Mike Unwin and illustrator Pau Morgan turn their attention to birds for the latest book in this excellent What On Earth? series.

In its usual way it’s packed with information and practical ideas that include things to make and do including the occasional experiment, all presented in a highly visual manner with every spread using the space alluringly in a manner somewhat akin to a comic.

As well as bird facts there are poems (Tennyson’s The Eagle and Lear’s There was an old man with a beard’) along with an invitation to readers to write a bird poem of their own. On the literary side too is ‘The king of the birds’ a story based on an old Celtic folk tale, which might also inspire story writing by readers.

You may want to try dancing like a bird; 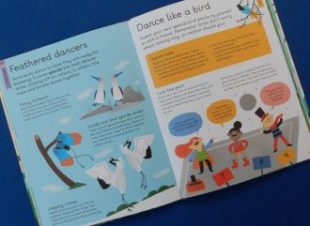 or perhaps get outdoors and listen to some birdsong, even catching the dawn chorus if you’re up early enough. 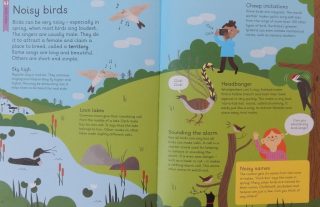 The book is divided into four sections: What is a bird?; Bird food; Bird life and behaviour and Enjoying birds, and very page turn brings something to excite, or fascinate young readers.

Offering a great way to discover things avian in all kinds of interesting ways, the book concludes with a glossary and an index.

Do Sharks Glow in the Dark?
Do Tigers Stay Up Late?
Mary Kay Carson
Sterling

Splendid photographs and sequences of facts in response to a series of introductory questions – one per page (or occasionally spread) – present the essentials relating to two very different, but both predatory, animals.

No, sharks do not have bones; their skeletons are cartilaginous (a fact I remember well from my early days of studying zoology); and they have both skin and scales. Did you know people once used dried sharkskin as sandpaper? Or that adult sharks ‘don’t do the parenting thing’? Rather shark pups look after themselves.

And contrary to popular belief, only around six humans are killed by sharks in a year.

So it is with tigers: these creatures tend to avoid humans, their towns and farms, although it’s humans that are responsible for tigers being endangered with less than 4,000 roaming wild now, more than half their number being found in India.

I was fascinated to read that no two tigers have identical skin stripes, that a tiger’s skin is striped as well as its fur, and that tigers can swim for miles.

Unsurprisingly tigers don’t purr, growling, grunting and roaring are their ways of communicating.

Both books offer a fun and easy way to get to know something about two of the world’s most iconic creatures; and each has as part of the back matter, information about helping to protect the animals in question, some useful related vocabulary and an index.