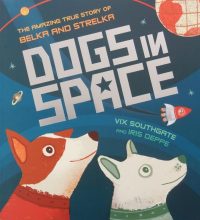 We’ve already had picture books about Laika (notably Owen Davey’s Laika the Astronaut) but now this, author Vix Southgate’s debut, celebrates two canine heroes from Moscow, Belka and Strelka, the first living creatures to actually survive being hurtled into space to orbit several times before being brought safely back to earth.

That though is getting ahead of ourselves so let’s go back to earlier in their amazing lives when the two stray dogs were roaming the streets of Moscow. From there they were picked up and taken to Moscow’s Space Centre for training to become part of the Russian Space Programme. The two little dogs were, so a space centre scientist Oleg decided, just right as they were clever, brave, calm and obedient; perfect characteristics for Space Dogs.

They were then subjected to all kinds of scientific experiments and a training regime before being blasted off in a rocket in August 1960. As Belka and Strelka orbited in space there were anxious times on earth; so still were they, that it was feared they’d not survived the launch. All was well however 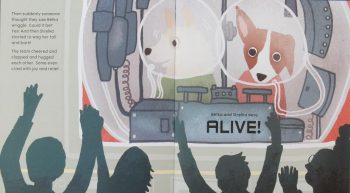 and after circling Earth many times, the two dogs started their descent – a dangerous operation – but finally …

History had been made.

The book doesn’t end there though: we learn that Strelka gave birth to six healthy puppies, both dogs lived long happy lives and that their incredible adventure acted as a trailblazer for Yuri Gagarin, Valentina Tereshkova and other astronauts. All this and other key events are presented, timeline style, in the final pages.

A real life story, engagingly and dramatically presented both in words and Iris Deppe’s pictures. It’s a fascinating and exciting way to introduce young children to the history of human space exploration.