Most people consider those much loved unicorns, that are all the rage just now, are imaginary; Dr Temisa Seraphini, author of this book and ‘leading expert’ so she says, on unicornology, would like to persuade readers to think otherwise.

She divides her fanciful presentation into three parts: the first being “What is a Unicorn?; the second provides examples of unicorns from various parts of the world and the third looks at the relationship between humans and unicorns. Her over-arching aim in all this is to encourage those magical creatures of yore back into our technological world of today.

In her introduction to the first part we read that unicorns are herbivorous but unlike their horse cousins, have magical properties; the author places them in the order Artiodactyla that includes, giraffes and goats among other even-toed ungulate creatures, assigning them to a separate family: Unicornus.

Then on the first spread we’re shown the six different species of the legendary creatures on a evolutionary timeline. 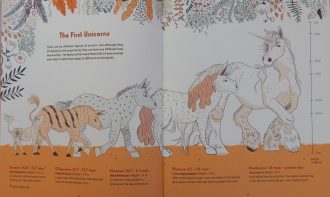 This is followed by a page detailing which parts of the unicorn’s anatomy have magical properties: Did you know that unicorn tears can apparently heal the sick and that the drinking of unicorn blood provides unimaginable strength. Hmmm!

The Horn is the next topic and there are supposedly three varieties – ridged, smooth and pearlescent; the latter so loved by some recent picture book creators; and if you believe it, in 1858 someone unearthed a skull that had once borne a unicorn’s horn. Uh-huh!

The second section takes us to six different habitats (with accompanying atlas), from the regions around Mount Everest

to the sandy African dunes and the moorlands of northern Europe. We learn  how different adaptations to climate have occurred over time  There’s an introduction to the winged variety and flight.

The final part talks of legendary unicorns; those who found their way into the annals of history or became subjects of artistic representation, as well as introducing some other unicornologists, giving guidance on tracking and communicating with the creatures.

Tongue in cheek though all this may be, it’s fun and rather enchanting. So too are Sophie Robin’s detailed illustrations that will definitely make readers smile as they peruse the pages and get lost in the spellbinding silliness.