This is an alphabet of rhyming verse wherein readers encounter twenty six of the most unlikely creatures you’d (n)ever imagine keeping as pets.

There are huge ones such as the killer whale – kept to the neighbours’ consternation, in a garden pond and the Elephant: ‘My elephant’s a perfect pet. / Nothing can improve her. / As when my room is full of junk / Her trunk’s a brilliant hoover.‘
With an untidy partner such as mine, this pet is one I’d certainly like to have around. And come to think of it the creature featured in R is for Rhino would come in extremely useful when it comes to finding somewhere to put all the items of clothing a certain person leaves around.

At the opposite end of the size-spectrum is S for Slugs. I definitely would not consider trying the suggestions put forward here: ‘Can you smuggle six slugs in / your sweater / And stroke all their lovely soft slime / Then juggle the slugs, and jiggle the slugs. / Maybe all six at a time? Can you snuggle six slugs in your duvet, / And lie next to them all / night through.’
Now while not having anything against the little creatures other than the fact that they’re a menace in the garden, I most definitely do not ‘adore them’, would never ‘bow down before them’. And as for uttering the final ‘ewwwwwwwwwww!’, so long as they keep off my plants, there’s no need to say that. 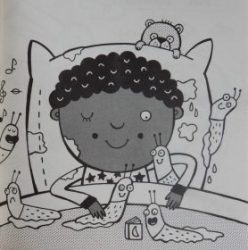 Playful, rhythmic and often gigglishly silly, there’s sure to be a pet poem or several for every young child in this assortment of Elli’s. Her final offering is an invitation to her readers to try writing their own poem – it’s issued first in rhyme and then followed by a helpful prose explanation on how children might have a go, and some of the tools they might use in so doing.

Anja Boretzki’s inclusive black and white, textured illustrations capture the humour of the verses, adding to the fun.