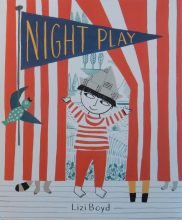 This is billed as a bedtime story in three acts and as the presenter states as the first act opens, it stars Arlo (a little boy) and Friends (his soft toys). That is the intention but as the boy tells us, he is already feeling sleepy and while the toys – a big cat, lemur, rabbit, fawn and two birds are engaged in planning Act 1, the boy falls asleep.

The excitement builds as props are gathered, costumes tried and hastily abandoned on account of their itchiness and weight; sound effects are debated, moves worked on and further sounds added … 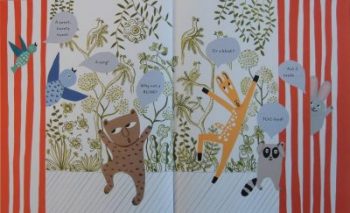 till all the noise eventually reawakens the slumberer.

Then with full cast reassembled, the curtains are opened in a dramatic gatefold to reveal …

and the entire show concludes with a bow and (instead of the suggested Act 4) the actors’ sleepy denouement.

Beautifully satisfying, this truly is a theatrical performance with clever design that promotes close attention to detail as well as using a similarly striking pattern for the stage curtains and Arlo’s pyjamas. I particularly like too, the changing backdrops for each spread with additional bit part players and other details for aware viewers to spot and enjoy.

A lovely introduction to theatre for little ones and perhaps, an inspiration for some to have a go creating their own dramas. 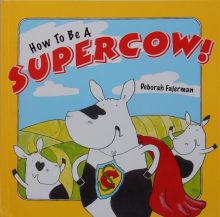 Here’s a little rhyming book that will resonate with a good many parents.

Three tired little calves attempt to sweet talk their mother cow into allowing them to delay bedtime with accounts of their secret must-do supercow activities.

There isn’t much these lively creatures can’t turn their hooves to. There are dragons to rescue from angry princesses; 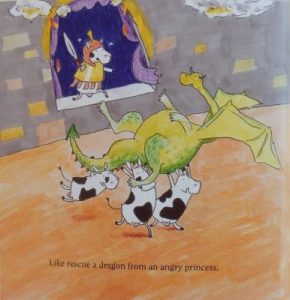 there’s gold to liberate from pirates, not to mention call outs to attend to, troublesome machines to fix and much more. Quite simply with such drama, there isn’t time for sleep.

Mum knows just how to deal with her young offspring however. She acknowledges their super powers but beguiles them into donning their night attire, 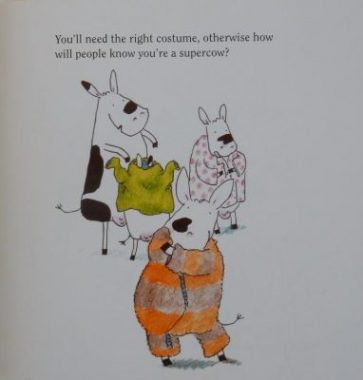 brushing their teeth, washing and delaying all those vital heroic actions till morning. Oh! there’s also a promise of a special treat  too.

All this crazy action is wonderfully illustrated in spirited scenes of totally endearing bovine characters that will amuse both little humans and their long-suffering adult ‘putters to bed’.