Having taught many Traveller children in various London schools, I was thrilled to have this new addition to Child’s Play’s books that feature travellers and their way of life.

This one tells of an erstwhile pit pony that escapes his underground life and gets in with a group of horses belonging to a Travelling family. Initially there’s some reluctance on their part to accept a pit pony: Grandad in particular wants to send him back to his fellow pit ponies but eventually he is persuaded to keep the animal and his granddaughter, young Lucretia volunteers to help look after the newcomer.

Polonius is quick to adapt to Travelling life and the children love him. Now all that Polonius wants is to be thought of as a hero.

One day his chance comes when the entire family has a large order of wooden stools to deliver to the docks in Daddo’s brand new truck, in time to be shipped to the USA the very next afternoon.

Next morning though, when they are due to set off, the family is engulfed in a thick blanket of fog that’s come down overnight. Could there be another way to make that important delivery? Perhaps with Grandad’s cart, so long as they can find an animal willing to brave the thick fog and lead the way to the docks.
It looks as though Polonious’s chance to thank his new family and be a hero has come … 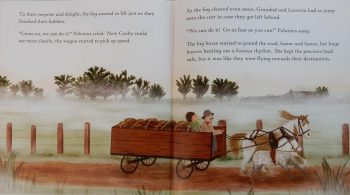 Romany storyteller, Richard O’Neill introduces readers to a wonderful, hardworking, loving Traveller family. With a sprinkling of traveller dialect he roots the family in its culture, an early 20thC industrial countryside, although some of the words are still used today. Readers and listeners will be able to work out the gist of the meaning of the occasional unfamiliar words from the context.
Feronia Parker Thomas’ scenes of a bygone rural life are painted with delicacy and really show the warmth of family feeling for one another and for their animals.