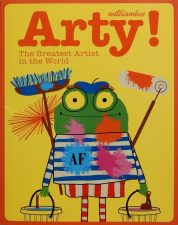 I fell for Arty frog on the very first page of William Bee’s totally funky book.
Arty is a really cool dude, reputedly the world’s greatest artist. How did he come to earn this prestigious title, you might be wondering, I certainly did: the question is answered in this biographical work.

Here’s what happened: first off he purchases some vital pieces of equipment: snow shoes, a warm winter jacket and an extra tall step ladder.

Secondly he scales Mount Everest where atop the highest peak, he sets to work with brush and paints to create the world’s coldest, highest painting.

Clearly this leaves his energy and creativity depleted so his plan is to pass a week or so recuperating in bed, but it’s not to be. There’s more work to be done: it entails climbing aboard the wing of a supersonic jet plane and performing a sequence of aerobatic stunts. 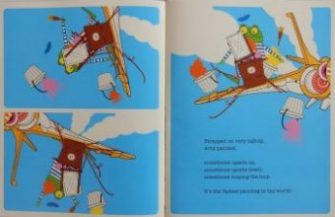 The fastest painting does earn him the R & R he so badly desires.

His next task is to render his pal Tallulah the spottiest painting in the world.

Surely, like me you must be thinking, that’s got to be ‘job done’.

Not so; there’s still the wettest ever painting, the most paintings created simultaneously, the loudest painting

and the prettiest to do; not to mention the hairiest (and incidentally, the scariest).

Poor Arty. His agent Mr Grimaldi is an incredibly hard task master and refuses his protégé further rest; instead the two of them perform a kind of cooperative act on a gigantic trampoline.

My goodness that little amphibian really does need some down time after all that.
But has he managed to earn that sought after title after his monumental outpouring of activity?

William Bee’s stories get more and more zany with each new book.  For me this one certainly has the most buzz: it’s off-the-wall, or should that be on-the-wall, brilliant.