Block play elephant style is pretty much the same as that of young children particularly when little Elephant has such a wonderful resource to use.

Kneeling on a carpeted floor our pachyderm starts stacking; his aim to build a tower the same height as he is (intention). How many more do I need he wonders (estimating) . 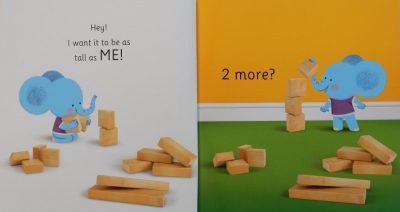 ‘1 2 3 4’, he counts the precariously balanced blocks, then hurrah! – arms stretched out wide in celebration (self-expression and self-esteem).

Elephant stands beside the stacked blocks (comparing/measuring), but almost inevitably given the unstableness of his stack CRASH! BOOM! Disaster …

Elephant though is not one to give up so easily. “It has to be as tall as ME!” he reaffirms. (resilience and determination).
He stops and thinks about the placement of that first block …

before starting to build another tower, self-questioning as he goes until, 8 blocks high it’s “WHOOPEE!” Success! This time Elephant gives the tower a celebratory bottom bash sending his stack crashing.
He still isn’t finished though; it’s time to experiment with that very long block and those others he’s yet to play with … “What if” – imagining. (love that one)

Harris introduces a multitude of maths concepts along with a host of other learning possibilities of block play.  Chatterton’s simple, uncluttered, but oh so telling, illustrations show not only Elephant’s learning but also his sheer joy in his experience.

Those, like myself who champion the activity – especially with the kind of equipment in Chris Chatterton’s photographic collages, will celebrate this book and want to show it to anybody who ever thought block play was mere messing around: they need to read it right away. It’s such a brilliant example of learning through play, made even better because the publishers let the story speak for itself.

After you share it with young humans (and any elephants that happen to be around), make sure you have a large set of wooden blocks available; they’re sure to be inspired.