There seems to be an ever-increasing number of ‘search-and-find books’ of late: here’s one from rising star, Katherina Manolessou that really caught my eye for its zany, action-packed illustrations.
When Daisy’s pet ladybird – a rather cheeky little creature – goes missing, she enlists the help of Basil, Plant City’s best detective.
Then with notes duly written by Basil, and appropriate tools in hand, the two begin a frantic search for the lost minibeast.
It’s a search that takes them through the entire city starting at Big Bones School, then moving on to the station, the museum,

the funfair, restaurants, the plant nursery. That would seem a likely place with its abundance of insect life; but there’s no sign of Ladybird. Actually, there is, but Basil and Daisy fail to find him, as they do in all the other locations; though that is part of what makes the book such fun.

Readers however, will eventually discover Ladybird’s whereabouts on every spread; or if not, they can always look at the answers inside the back cover.
In addition to the missing pet, there are five bees, five grey mice, someone crying and someone sleeping, all of which are waiting to be discovered at each place the detectives search, plus all the items printed in capital letters in the narrative for each venue.
I say ‘detectives’ in the plural because, as well as recovering Ladybird at the end of the search, Basil makes Daisy an offer she can’t refuse and that, I suspect, means more cases are to follow.
I spent ages poring over the wealth of details in each of the ten locations: every one has signs to read, visual jokes 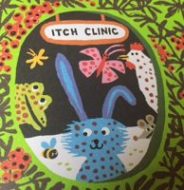 and a plethora of diverting happenings which I’m sure, young readers will enjoy as much as this reviewer did.
Between the covers of this book lies rich potential for language development, but more important, it’s enormous fun.