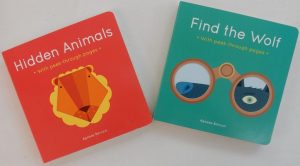 Hidden Animals
Find the Wolf
Agnese Baruzzi
Templar Publishing
Here are two wonderfully playful board books from Italian artist, Agnese Baruzzi.
In the former, the peep-through die-cut pages beguile readers with a series of different coloured shapes which, when the page is turned become transformed into in turn, a bird, a fox, a bug, a cat,

a dog, a jellyfish and a lion.
Part of the fun, once children have worked out what is happening, is to guess the animal from the coloured background on the left-hand side before the page is turned. I was wrong on a couple of occasions.
Find the Wolf takes readers on a hunt for a ”WANTED’ wolf . As we walk through the woods we see for instance, two pointy ears or a set of grey paws. Or are they?
Here Baruzzi uses two die-cut circles on each right hand page and by asking such questions as ‘Are those his eyes?’

leads us to believe’ that behind them the missing lupine lurks. But on turning over we see something completely different.

The elusive creature (or traces of same) is actually lurking somewhere on every recto which further adds to the delicious hide and seek element. 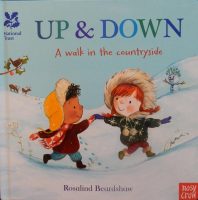 Up and Down
Rosalind Beardshaw
Nosy Crow
This lovely board book, published in partnership with the National Trust is Rosalind Beardshaw’s latest addition to her A Walk in the Countryside series.
Winter has well and truly arrived; so the two small friends don warm clothes and boots before setting off into the great snowy outdoors.
Then it’s Up hill and Down on their sledges, followed by on foot encounters with a variety of creatures both feathered and furry

as they spend a wonderful day together savouring the delights of their rural romp.
There’s plenty to enjoy and discuss with toddlers in addition to the inbuilt ‘opposites’ the minimal text offers. 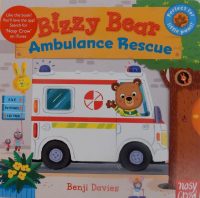 Bizzy Bear Ambulance Rescue
Benji Davies
Nosy Crow
Toddlers will delight in making the ‘nee-naw’ ambulance sounds and manipulating the moving parts in the new Bizzy Bear board book.
Bizzy Bear assumes the role of paramedic in his latest episode and he’s responding to an emergency call out. A little cat has had a cycling accident and Bizzy rushes to the scene where he helps lift the patient into the ambulance

which then rushes the injured kitty to hospital where he’s treated for what looks like a broken leg. Short and sweet!