Edgar and the Sausage Inspector
Jan Fearnley
Nosy Crow
Edgar and Edith are brother and sister and there’s nothing Edward likes more than to make Edith happy. Determined to provide a tasty treat for his sibling, he sets out into town to buy something really tasty for dinner. Sure enough, very soon he spies the ideal treat: her very favourite food – sausages. Feeling extremely pleased with his purchase Edward heads home. Suddenly though, he’s apprehended by a hat-wearing rat blocking his path, claiming to be “The Inspector” and demanding a look in Edgar’s bag. Duped by the creature’s appearance, Edgar shows the inspector his purchase and immediately has it confiscated “for further inspection”. Consequently it’s a very dull dinner for the cat duo that evening as poor Edgar explains about the rat.
Next day however, Edgar’s off again determined to make up for his previous loss and this time his purchase is some delicious cakes from the patisserie.

Off he sets home clutching his basket when who should appear again but The Inspector –sporting not only a hat but also a large badge this time. Once more it’s the rat who enters his hole in the wall with his paws full and Edgar who heads home empty handed. 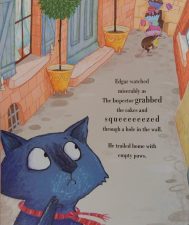 Day three dawns with both brother and sister’s tummies exceedingly rumbly. Off goes Edgar, loads up his shopper with yummy treats and … 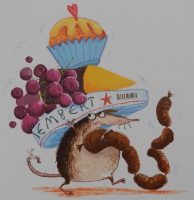 Will Edith ever get that scrumptious repast her brother so longs to provide for her? And will that significantly more rotund, dastardly rat ‘Inspector’ get his just desserts?
Jan Fearnley exploits the inverted slang use of the word ‘bad’ (popular with teenagers) cleverly in her amusing story, which is based on a feline member of her own household. The text, with its rogue inspector and his repeated “Hold it right there!” refrain is enormous fun to read aloud and cries out for audience participation. The variety of perspective and depth of field in Jan’s illustrations draws the eye into the action, and helps focus attention on the wealth of detail in every one, be it double spread, single page or vignette.
Altogether a scrumptious feast for ear and eye.