This is NOT a Cat!
David Larochelle and Mike Wohnoutka
Sterling Children’s Books
Using only the words from the title, Larochelle has created a book that is absolutely perfect for beginning readers and it’s lots of fun.
We join three little mice as they arrive at school; three little mice each with a chunk of cheese for lunch. Their first lesson is already displayed as they sit down already looking more than a tad bored …

Now this is an old fashioned school with transmission style teaching – desks facing front so one can perhaps excuse the lack of a security system (but that’s getting ahead of the action). One pupil at least is paying attention as the teacher continues: “This is not a cat.” the assumption being he’s writing notes on the lesson; the other two are already distracted and playing around. No one notices what’s already appearing outside the window, not even the grinning goldfish.
“This is not a cat.” … “This is not a cat.” continues the teacher oblivious to the fact that a certain intruder is on the verge of entering …

Suddenly the whole atmosphere in the room changes as the presence of the visitor is noticed, first by the teacher and then as realisation dawns …

The pupils flee leaving the intruder to enjoy the spoils left behind, but just who IS that greedy guzzler.
Clever as the text is and it’s undoubtedly so, without the illustrations the book wouldn’t be anything like as funny as it is. Wohnoutka’s cartoon style scenes are full of comic detail: the changing expressions of the goldfish, the antics of the pupils – note the cleverly aimed paper aeroplane, the cheesy shapes chart to mention a few; and of course, there’s the grand finale.
Also fun for those in the early stages of reading is:

Later, Gator!
Erik Brooks
Sterling Children’s Books
It’s hard moving to a new home especially having to say farewell to all your friends. That’s just what young Gator discovers having moved to a distant neighbourhood with his parents where there isn’t a soul he knows. He decides to write to his old friends telling them how he misses them and eventually back come some letters. Yes, his pals are missing him too but their communications are also encouraging … 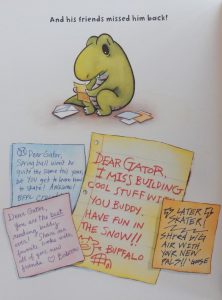 And made him feel a little bit bolder, bold enough to start making a whole new set of friends …

The text is minimal but the amusing illustrations speak volumes.