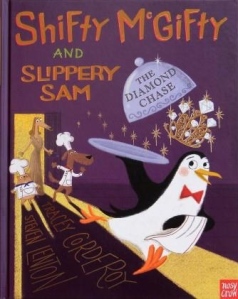 Shifty McGifty and Slippery Sam: The Diamond Chase
Steve Lenton and Tracey Corderoy
Nosy Crow
Criminals no longer, Shifty and Sam have replaced their swag bags with bakers hats and are now to be found baking for toffs in upmarket abodes and serving only the jammiest of doughnuts to their clients. They’re presently occupied preparing for Lady Kate’s birthday ball at Woofington Hall where we find them whisking and whirling, patting and icing despite the presence of Lady Kate’s mischievous young nephew, Barnaby who wants to play ball.

When all the guests are seated and eagerly awaiting the commencement of the feast set out before their eyes, there is one notable absentee, their host, Lady K.
Suddenly she burts on the scene exclaiming “A thief! At my party! My diamond tiara has gone. I’ve been ROBBED!” Silence falls over the room and is then broken by assurances from Sam and Shifty about their thief catching activities of yore and off the three of them go to the crime scene.

There Lady Kate points out the absence not only of her tiara but also the statue upon which she’d hung it while she set about fluffing her hair. Black and white things are mentioned and suspicion falls immediately on a penguin waiter who just happens to pass by, only to beat a hasty retreat into one of the rooms … 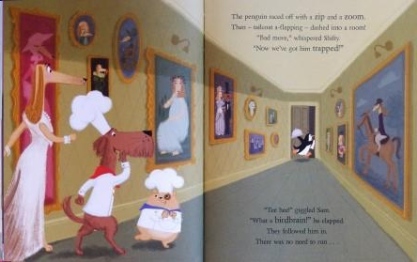 But the thief’s capture isn’t in the bag so to speak quite yet, for what his pursuers find behind the door is not just the one, but a whole plethora of penguins quite simply, having a ball.

Will Shifty and Sam unmask the thief and take possession of the missing tiara? Or, will one of their number, Sidney Scarper, do as his name says and well, scarper? Maybe the robber-chasers will have something to thank Barnaby for after all …
With a perfect finale – for most, but not quite the entire cast of characters, this hugely enjoyable romp is sure to please all Shifty and Sam’s established fans, and likely win them a whole lot more, to boot.