1 2 3 A Walk in the Countryside
Rosalind Beardshaw
Nosy Crow
This is a companion volume to ABC A Walk in the Countryside also published in association with the National Trust. Here the two small friends, plus dog are taking an autumnal walk by the river, over the hedgerow stile, pausing to look at falling leaves and scudding clouds, squirrels busy collecting acorns.

Then over the stepping stones to the other side of the river where rabbits play; and on into the pine woods. Next it’s time to pause for a tasty snack – thank you apple tree …

before stopping again for a spot of fish watching, blackberry picking – yum yum –

and, as the sun sinks the youngsters take delight in the flock of geese overhead 19 in all. But there’s still more to count – 100 stars, as they make their way homewards ready for snuggling up in a cosy bed.
With a delightful visual narrative accompanied by named items to count, this is a super little book to share with tinies either as a prelude to, or after, their own country counting walk. It’s as well it’s sturdily built to stand up to all the frequent re-readings I forsee for this enchanting country foray. Those illustrations would make a cracking number frieze for an early years setting or small child’s bedtoom. 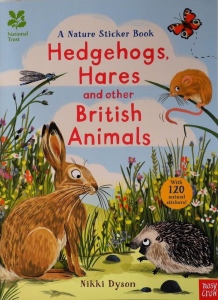 Hedgehogs, Hares and other British Animals
Nikki Dyson
Nosy Crow
This ‘Nature Sticker Book’ goes right through the seasons visiting various habitats from the garden, the forest – underground and above in the spring; 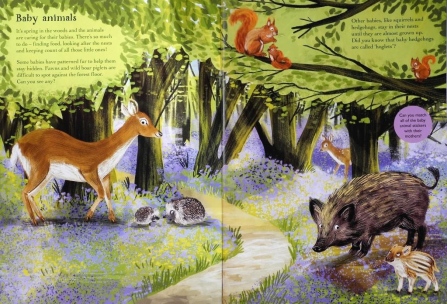 to the river and open countryside at night. We’re then taken closer up into tall grassland that provides a home for harvest mice, rabbits, grouse and hares, and many wild flowers too can be found. The marine life and the seashore spreads focus mainly on large mammals – whales, dolphins, porpoises and seals although one of the activity spots on this spread invites readers to choose a position for the lighthouse (one is included among the 2 pages of stickers in the “On the beach’ section).
Seasonal changes are evident in the ‘Busy in the autumn’ woodland spread that shows ripened fruits and animals foraging for food to store for winter; and there’s a snowy woodland scene too … 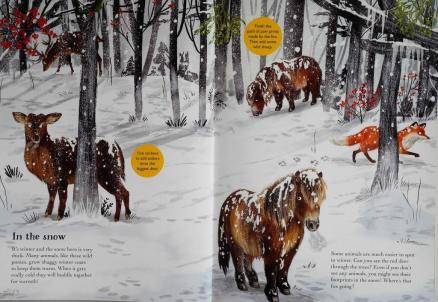 The final focus is on the reintroduction of some animal species such as beavers, and a playful mention of the possibility of wolves roaming once more. The last spread is a checklist of 28 different species that can be filled in over time.
Nikki Dyson, who illustrated Zippo the Super Hippo, provides 11 gorgeous natural scenes into which she places a plethora of wild animals that, with a touch of playfulness, she imbues with real character. One can imagine children, once they’ve added the appropriate stickers and completed entire scenes, creating their own stories relating to these creatures.

They might even want to include some of the factual information gleaned from the scientific material provided for each spread.
‘This book is all about mammals …’ says the introduction but it’s about much more: the flora are equally wonderful, as are the birds, insects and other small animals that have found their way into Nikki’s natural locations.