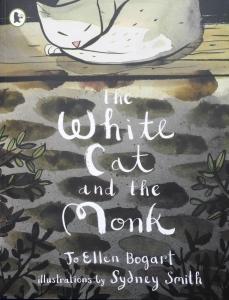 The White Cat and the Monk
Jo Ellen Bogart and Sydney Smith
Walker Books
Having been totally bowled over by Sydney Smith’s Footpath Flowers, I knew I wanted to review this book despite not being familiar with any of its author’s work. (In her note at the back she tells us ‘In Irish, the word bán means white. Pangur has been said to refer to the word fuller, a person who fluffed and whitened cloth. We might think, then, that Pangur Bán was a cat with brilliantly white fur. Perhaps she even glowed in the candlelight.’) In Sidney Smith’s spread here, she surely does so …

In fact in all his glorious illustrations herein, I detect the portrayal of a similar reverence for life and learning shown by the two characters , the monk and the cat, as those of the adult and child in Footpath Flowers.
Essentially, this is an interpretation of a medieval Irish poem penned by a Benedictine monk and it’s through the monk’s lenses that we view his solitary world. The scholarly monk shares his cell with the white cat of the title and with readers, his meditation on life with Pangur and with his ‘peaceful pursuit of knowledge’ through his books. While he does this the cat in its turn is busy with his own pursuits in the spartan abode: he stalks a mouse …

Each is content with his lot and both are completely absorbed in what they do.

There is actually within this story, another story for one of the monk’s manuscripts shows this –

an even more ancient portrayal of another monk and cat. And we’re treated to a marvellous illuminated manuscript spread which in itself opens up a wonderful opportunity to discuss the art created by medieval monks.

My first encounter with the poem was through the W.H. Auden adaption wherein the monk addresses the cat and begins:
Pangur, white Pangur,
How happy we are
Alone together, Scholar and cat.
Each has his own work to do daily;
For you it is hunting, for me, study.
This second, thanks to Bogart and Smith is for me, more beautiful, more wondrous. Towards the end, Smith’s ink and watercolour frames take us towards the window … 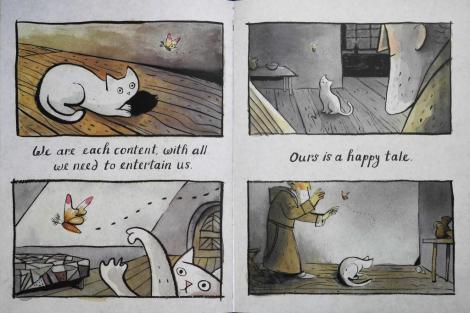 and the monk’s final words

” … and I find light in the darkness.” Pangur seemingly, is the light in more than one sense. Both monk and cat can delight in and celebrate each other’s good fortune : so too can we if only we choose to view the world through similar lenses.
Like the partnership between monk and cat, that between author, Jo Ellen Bogart and artist Sydney Smith is totally in harmony; and the outcome of their collaboration is so much more than the sum of its parts.

One thought on “The White Cat and the Monk”