Aliens Love Dinopants
Clare Freedman and Ben Court
Simon and Schuster
Aliens, underpants and dinosaurs all in one story – what more can a pants loving reader ask for? Herein the spacecraft, piloted by the pantsophile aliens, is zapped by lightning as it whizzes through the skies forcing it to crash-land in the jungle.
But BLEEP BLEEPS are heard loud and clear from the pants-tracker and immediately the aliens are hot on the swampy trail. A trail that finally leads them to …

And it seems those dinosaurs are ready to fight to the death over their precious stash. But perhaps that isn’t going to be necessary: after all both are really on the same side – that of PANTS. So maybe a solution – a pantstastic one – can be found that works to the satisfaction of all concerned … 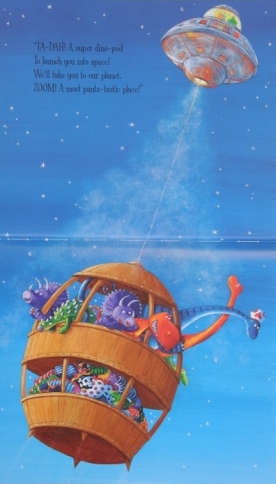 And if so, all of us humans had better keep extra special watch over our washing lines when it’s chuddies drying time.
Can it really be the seventh of this ever-popular Underpants series? This one was eagerly seized upon by the five and six year olds I took it to, and several readings were demanded. 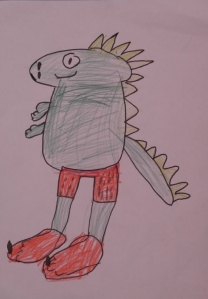 Maria was certainly impressed by the story and left me this.

More power to the seemingly indomitable pants force and the creators thereof. 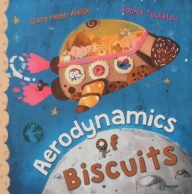 Aerodynamics of Biscuits
Clare Helen Walsh and Sophia Touliatou
Maverick Arts Publishing
When hunger pangs strike, Oliver (normally a good, kind sort of a boy) creeps downstairs to raid the biscuit barrel only to find it completely empty. But what are those shadowy things scuttling across the floor, ‘Hauling and heaving, towing and tugging.’ out through the door and into the garden? 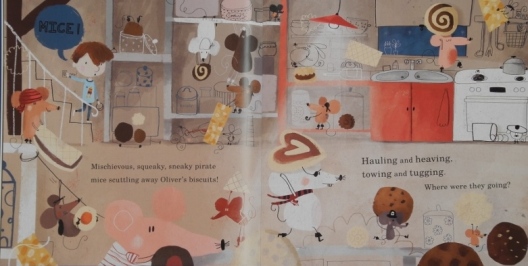 The marauding mice however, are not consuming their spoils, oh no, they’re in the process of constructing or attempting to, aerodynamic biscuit rockets in which to fly to the moon and there partake of some – well you know what the moon is said to be made of.

However their design skills leave a lot to be desired and it’s only when Oliver offers to help with the rocket building that things start to look more promising, and finally it’s blast off time.
Once at their cheesy destination, the mice can hardly wait to tuck in to the feast that awaits them when they discover that their leader, Captain Sneaky McSqueaky has gone missing: seems his appetite is for something other than cheese …
Are the mice to be marooned on the moon without a craft or can they find another way to return to earth? Perhaps, with Oliver’s help …

This unlikely story is great fun. The nature of the telling is such that it draws listeners in from the start, keeping them involved and interested throughout and offering possibilities for active joining in with the rocket building and cheese gathering as the story unfolds.
Equally, Sophia Touliatou’s quirky illustrations are packed with amusing details, creating a visual feast of small rodents engaging in all manner of tasks, tiny tools, and tasty treats – sweet and savoury, not to mention a whole host of speech bubbles, noises, labels and more for the eyes to digest.

One thought on “Aliens Love Dinopants & Aerodynamics of Biscuits”