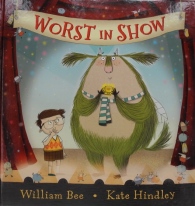 Worst in Show
William Bee and Kate Hindley
Walker Books
Albert has a special pet, Sidney – a monster no less and to prove just how special he is, Albert is entering him in the ‘BEST PET MONSTER IN THE WORLD! COMPETITION” to be televised live from the studio. The competition has five rounds: Sidney scores a grand total of zero: he doesn’t have any warts let alone hairy ones,

he’s unable to hover, is virtually without parasites, his farts are almost fragrant and his breath barely warms a sausage. ‘GOODNESS THE EMBARRASSMENT!’ How much can Albert take?
But listen –surely that isn’t Albert and Stanley’s names on the announcer’s lips during prize giving …

Finally, as the two make their way home, Albert concludes that Stanley’s particular qualities are just not those appreciated by the show judges; he’d much rather have a sweet smelling, large-sized, cuddly; lovable best friend after all.
William Bee’s tale is monstrously mad and enormous fun – just the thing to appeal to children’s sense of the ridiculous. Clearly it had that same appeal for Kate Hindley too; her illustrations are wonderfully whimsical. Crammed full of deliciously disgusting details – the monsters and their hangers-on; and with delightfully droll human characters – the judges, camera crew, Albert and other pet owners, each camera shot and off-stage scene is a feast for viewers of this unlikeliest of contests. That final fold-out scene is a bravura performance in itself.
An inspired collaboration this.

More from William Bee in:

Stanley’s Café
William Bee
Jonathan Cape
Multi-talented hamster, Stanley has donned his chef’s hat and with the help of friend, Hattie, is busy at work in his café. The first customer is Myrtle; she’s come for breakfast. Before long though it’s lunch for Charlie and Gabriel – yummy pancakes with lashings of syrup. Then Stanley has to go out for fresh supplies: he’s baking a special birthday cake for his pal Little Woo.

Happy Birthday, Little Woo. Shame about the washing up.

More from Stanley and friends in:
Stanley the Builder
Jonathan Cape
When Myrtle buys a plot of land she asks Stanley to help build her new house. Out comes his bulldozer to clear the ground, and then he has to dig out the foundations. Charlie’s on hand to help with the cement after which they both get on with the bricklaying, roof tiling and fitting windows.
A coat or two of paint and the job’s done: two tired workers, one happy Myrtle.

Once again, William Bee’s Stanley is set to delight youngsters with his machines, tools and implements. As they enjoy the stories – which they undoubtedly will – preschoolers will absorb lots of information relating to Stanley’s activities both from the straightforward, descriptive texts and captivating, clear illustrations.
I wonder what he will turn his paws to next?

One thought on “Worst in Show and more of Stanley”