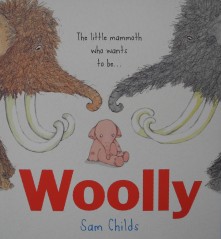 Woolly
Sam Childs
Scholastic pbk
The new addition to the mammoth family has something of a problem. She’s not woolly at all, just the opposite in fact; she’s bald and pink and feels the cold terribly. Mum has an idea – a tea towel wrapping, but this scares off the potential friends she meets. Poor Woolly: back home she goes. Time to start knitting advises Daddy but Mummy has another idea in the form of a rainbow-hued, feathery coat. However, Woolly’s attempts to emulate the birds win her no friends either so it’s back home once again.

This time though, Mummy heeds Daddy’s advice and gets knitting. 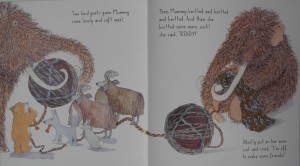 The outcome? A very happy Woolly with lots of playmates until she gets overheated in the family cave and rushes out to play in the cold, cold snow. That proves to be her undoing but it’s not a total disaster; far from it in fact … Unashamedly cute and heart-warming; what endearing characters Sam Childs has portrayed in the mixed media illustrations of her hugely enchanting story.
Buy from Amazon 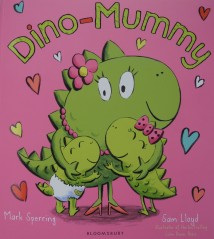 or evening bath time bubble maker she is hard at work caring for and entertaining her two demanding dino-offspring. Nothing seems to faze this super-mum and although it would have been good to see her engaging in some less traditional female activities, Dino-Mummy as portrayed by Sam Lloyd is a charmer with her matching pink shoes, necklace and floral adornment. Sperring’s rhyming text reads aloud well though I suggest if you are sharing it with a group that you try it on your own first as the phrasing in one or two places can be a bit tricky on the tongue.
Definitely a good bet for appreciative (dino) tinies to give to their mums on Mother’s Day.
Buy from Amazon

There’s a Dinosaur in My Bathtub
Catalina Echeverri
Bloomsbury pbk.
Not so much a dinosaur, more an imaginary friend is the huge green creature in this story, especially as he is only seen by Amelia, sports a large black curly moustache, hails from France and answers to the name, Pierre. Said large beast certainly adds spice to Amelia’s life: together they picnic on the moon, dance upside down to Pierre’s magic violin and much more besides, the bathtub becoming a vehicle for their flights of fancy.

Sadly though, Pierre and others like him only stay during the summer months and so, when the autumn leaves begin to fall, it’s time to bid farewell. But not before one last special picnic with Pierre’s most favourite food: can you guess what that might be?
Catalina Echeverri’s wonderful scenes abound with witty detail, including captions and labels, adding to the quirky humour of her tale, a tale told by Amelia herself who engages her audience with her opening speech … ‘My name is Amelia. … Shhh!! It’s a secret so you mustn’t tell anyone in the whole world … OK?’
Buy from Amazon

Toot Goes to Dinosaurland
Catherine and Laurence Anholt
Nosy Crow pbk
Toot has a little red car with a magic satnav that will take him and his toy puppy to all manner of exciting places. He decides to visit Dinosaurland. (I can see a series coming here.) Off goes the car, through the city, into a tunnel, up and down mountains, to the top of a high hill and down to his destination. There he meets dinosaurs of different sizes – a weeny one, a middle-sized one and a big one but not, much to Toot’s relief, a huge enormous one. So what is that long green slope you are driving up Toot? “ROA-AR!”

Time for some fast thinking and a clever trick to escape those open jaws.
This story will go down well with very young children either individually or in a preschool setting. The bright illustrations are engaging and will hold their interest; and the text offers lots of opportunities for audience participation through sounds and actions, Children will enjoy being in the know as they notice what Toot does not; that he is driving along a tail-shaped road towards danger.
After sharing the story you could take the opportunity offered therein to talk about comparative sizes. Then, why not let preschoolers play out the story with small world dinosaurs of various sizes, a little rabbit soft toy for Toot and a toy car large enough to fit him in; the children could decide what else is needed.
Buy from Amazon 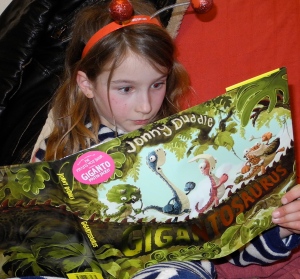 Nina is immediately grabbed by the story

Gigantosaurus
Jonny Duddle
Templar Publishing
“His feet go STOMP!
His jaws go CRUNCH!
In the blink of an eye
You’d be his LUNCH!”
Watch out! The Gigantosaurus is about, warn the dinosaur mums as Bonehead, Tiny, Fin and Bill set off to play on the hill one day.
Self-elected lookout, Bonehead posts himself on the termite nest and it’s not long before he raises the alarm “GIGANTOSAURUS!”…

THUD THUD THUD – a false alarm as it turns out. So too is the second cry and the third. Bonehead laughs at his pals, leaves them and goes to take a nap so he says, but “GIGANTOASARUS!” he calls again. Enough is enough decide the others going off to explore but then …
Duddle’s prehistoric take on The Boy Who Cried Wolf is nothing short of stupendous. The rhyming story rollicks along and with their filmic quality, the digitally created illustrations almost leap off the page.

There’s also a fold out page and sturdy dust jacket that doubles as a large two-sided poster,one side of which shows the dinosaurs on a time-line and, to whet the appetites of knowledge seekers, there are snippets of information about the featured dinosaurs on the two final double spreads.
With his dinosaurs, Duddle has definitely done it again. 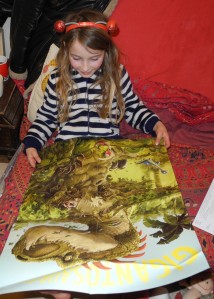 Finally, not really a picture book

Hot Dogs and Dinosnores
Amanda Li
Macmillan Children’s Books pbk
‘What do you get when a dinosaur sneezes? Out of the way’.  You can find this joke, more dinosaur jokes and a whole host of others in this ‘first animal joke book’. It’s ideal for those gaining confidence as readers, and even if they don’t laugh uproariously at Li’s one hundred odd groan making jokes, Jane Eccles’s dotty line drawings are sure to raise a smile.
Buy from Amazon

Find and buy from your local bookshop: http://www.booksellers.org.uk/bookshopsearch

Have you marked  5th March in your diaries?