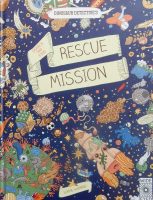 Dinosaur Detective’s Search and Find Rescue Mission
Sophie Guerrive
Wide Eyed Editions
In his plane, which looks more like an inflatable toy than anything capable of carrying a dinosaur, famous Dinosaur Detective sets forth on a mission: to find five missing items as requested by the likes of a dog, a princess, a teacher and a distraught wife, hidden somewhere in eleven different locations including what looks like a Medieval European village, an underground cave network, atop a mountain, 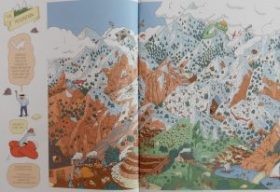 a funfair, a forest, a completely crazy-looking outer space neighbourhood and a city.

It’s difficult to know where to start each search as your eyes keep getting drawn to features of interest – mine did anyway – and some of the spreads are so densely packed, it’s mindboggling, and easy to get absorbed in the surreal nature of the whole thing rather than the task in hand. It’s just as well there’s an answer spread at the end.
Dinosaur Detective’s plane transforms into a kind of tank (to find the missing toad) and a flying saucer – another fun feature.

Wilfred and Olbert’s Totally Wild Chase
Lomp
Little Tiger Press
Herein we meet natural history explorers Wilfred and Olbert and follow them on a quest to discover a new animal and thus win the coveted Nature Discovery Prize. And when an unidentified butterfly just happens to float through the window, they decide their chance has come. Off they go in hot pursuit but who will be the one to claim the prize?
Their journey has them dashing through forests, diving into oceans, crossing deserts, and wild grasslands, 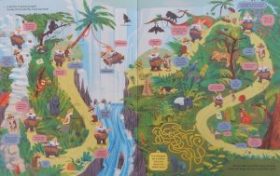 as they battle to reach the butterfly first.
In the end teamwork wins out and mission complete, they claim their trophy.
The whole adventure is perilous and it’s something of a task to keep track of the two competitors and their antics en route – almost being the next meal of a lion, or being engulfed by ice, for instance – but the whole crazy drama is totally engaging, full of funny moments, things to search for, and of course, wild animals.
Wild too are Lomp’s hilarious, cartoon-like illustrations, full of daft doings and silly speech bubbles making every spread a treat to linger over.
Action-packed they surely are! 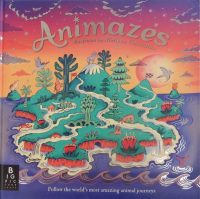 Animazes
illustrated by Melissa Castrillión
Big Picture Press
This unusual book of mazes follows the journeys of fourteen animal migrants from Antarctic krill and Monarch butterflies to Humpback whales and Mali elephants.
For some of these creatures such as reindeer, finding food is the reason for their journey; for others, such as Rockhopper Penguins, it’s to seek a suitable environment for the survival of the next generation.
In tracing their journeys, the aim is to discover the one safe path for each animal and in so doing, readers will discover a host of fascinating facts about the creature. Did you know for instance that Mali elephants all pass through one narrow passage, The Porte des Éléphants on their migratory travels? Or that Wildebeest participate in the largest mass migration of mammals on earth?

It’s Katie Howarth who provides these and the other interesting snippets of information that support Melissa Castrillión’s intricately detailed illustrations through which the mazes are woven.
Absorbing, fun and educational.

The Fox and the Wild
Clive McFarland
Templar Publishing
Fred’s an urban fox born and bred but even so he’s not at all keen on urban life with its smoke, noise and fast moving traffic. In contrast, his cousins are city lovers roaming the streets at night hunting for tasty tidbits. One particular night while so doing, Fred and his fellow marauders cause a disturbance around the bins and have to flee.

Fred becomes separated from his cousins and that’s when, having seen a flock of birds, he decides to find out about the possibilities of life beyond the city. But how can he do so without being able to fly like the birds – in particular the one he has an encounter with? “I don’t need to fly, I’ll hunt!” he assures the bird but that proves rather more difficult than he’d envisaged … 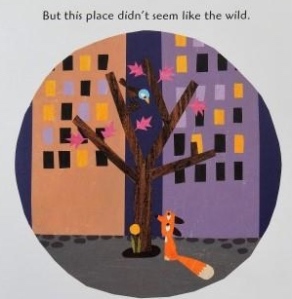 Trees with spreading branches and the wind blowing over the hills seem elusive; all he finds is hard ground … 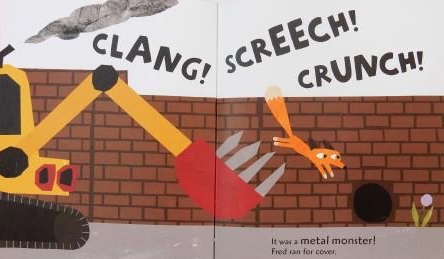 noisy monsters … and a dark tunnel. But our Fred is a determined character and he carries on looking, feeling, smelling and listening …

There’s a wonderful finale which I won’t spoil but suffice it to say, what he finds makes everything worthwhile …
Such a lovely story with a powerful, inherent environmental message and such sublime illustrations (McFarland uses paints, crayons and cut paper, and then digitally renders): this is a super book to share and one that’s likely to inspire listeners to try creating their own urban and ‘wild’ scenes using some of Clive McFarland’s techniques.