What better way to welcome the month of May than with this wonderful new book and music project from Tiny Owl, The Phoenix of Persia. The tale, told by acclaimed storyteller Sally Pomme Clayton is the second in the publisher’s One Story, Many Voices series.

It’s based on a story from Iran’s most important epic, and one of the world’s greatest, Shahnameh, by 10th century Iranian poet, Ferdowsi and tells of an ancient Persian king.

The setting for the telling is Daneshjoo park where children, including Ali and his sister Shirin, are gathered awaiting the magical ‘Once upon a time …’

We hear of the birth of the multi-hued Simorgh, a firebird with a secret: her feathers have the magical power of granting wishes and making dreams become reality, a bird that is reborn every thousand years from the ashes of her nest. This magnificent creature is the titular Phoenix of Persia.

At that time the land is under the rule of King Sam and Queen Aram who are overjoyed at the birth of a long-awaited child, a son and prince whom they name Zal.

The ruler’s joy is short-lived though for when he uncovers the child’s head he sees, not the locks of a baby but the white hair of an old man. Immediately rejecting what he considers an imperfect infant, the king summons a soldier and orders him to take him to the mountains and leave him. Reluctantly the soldier does as he’s bid, placing Prince Zal on a wind-swept rock.

The sobs of a hungry, distraught babe reverberate over the mountains and are heard by the Simorgh out hunting for food for her chicks. Resolving to care for the tiny human, the creature picks him up, carries him to her nest and tucks him in among feathers.
Years of lessons in languages, the arts,

sciences and princely skills follow and sixteen years later Zal is a wise teenager. His parents meanwhile are suffering – his mother from nightmares, his father from regrets. So terrible does he feel that King Sam calls the soldier and the two men ride off into the mountains, and come upon …

“Can you forgive me?” called King Sam.

Forgiveness follows and a paternal plea to return home initially refused, is accepted thanks to Simorgh’s words of wisdom to Zal that bring about a change of heart.

Then father and son (with some special feathers from the phoenix’s tail) travel home to be welcomed by an overjoyed mother. He adds a fiery phoenix feather for protection to his new crown 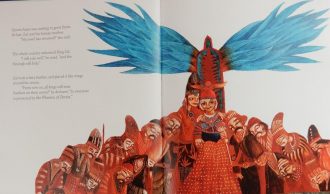 and there the storyteller in the arena stops, leaving one of the audience wondering about whether it was ever burned.

With acceptance at its heart, Sally Pomme Clayton’s telling really does feel like a drama unfolding before you, all the more so accompanied by Amin Hassanzadeh Sharif’s wonderful, richly textured, jewel-hued scenes. That’s not all though: there’s a QR code at the beginning of the book you can use to listen to a beautiful musical accompaniment on Iranian instruments to Sally’s narration.

Rich in classroom potential, this book is FAB-U-LOUS!